Here’s a huge shocker for my readers. I don’t have any sort of emotional stake for Star Wars. I don’t know anything about the series nor am I interested in watching it. The little I know about Star Wars is from the mixed reception of every film by the fans. However, it seems like there’s a consensus about how the “Prequels”(?) are the worst thing to ever have happened.

While I don’t agree or disagree with the fanbase. I will mention that I got the chance to see the pod racing sequence when I was a kid. Unsurprisingly, I was too amazed by the sequence because… Well, it’s pod racing, right? Those were some nice effects and apparently the only highlight of The Phantom Menace.

Fast forward a few months, and you’d see kid Ule playing Star Wars: Episode 1 Racer and thinking it was the best thing ever. However, it’s been a long time since this game was released to the public on PC, N64, and PS1. So, it wouldn’t be surprising if my opinion changed over time. I know I wasn’t returning to Racer even out of curiosity. As luck would have it, a Nintendo Switch port has appeared 20 years later. So, what better way to get a feeling on whether or not I actually enjoy this game nowadays? 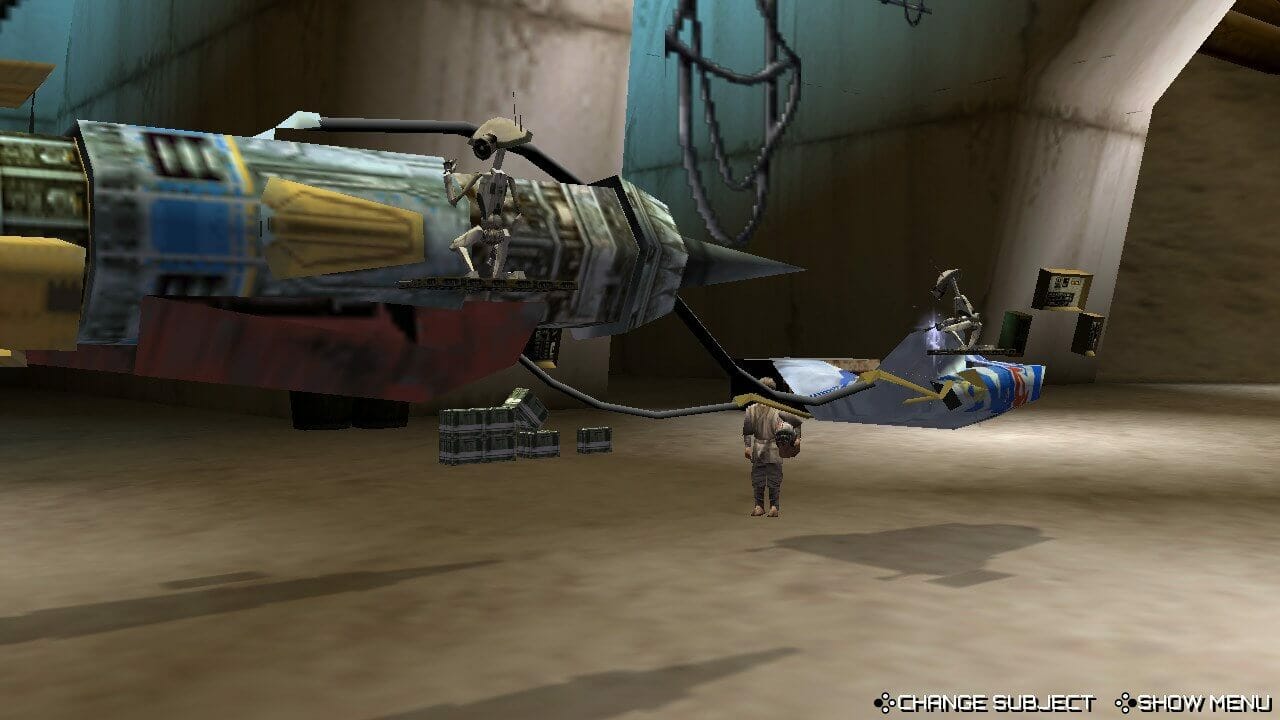 The Nintendo Switch port of the game is made by Aspyr Media. Not only does it bring HD textures for characters and environments, it also brings a beautiful 60FPS at a 720p resolution. I swear, though, if the Nintendo Switch wasn’t able to handle this late 90’s game at 60 I would’ve screamed at how weak the console was.

As the title says, Star Wars: Episode 1 Racer is based on the pod racing sequence from The Phantom Menace. The best pod racers challenge the elite competitor Sebulba for the title of fastest pod racer in the galaxy. That’s… Pretty much it, story wise. It’s just your run of the mill excuse to have every character seen in The Phantom Menace race throughout different planets.

Featuring a Bunch of Nobodies and Anakin Skywalker

Yes, all the characters nobody cares about such as Dud Bolt, Gasgano, and Ody Mandrell are here. Players will be able to select Anakin Skywalker right off the bat while the titular Sebulba needs to be unlocked. As this is basically a deliberate attempt to piss off Star Wars fans, I picked Anakin Skywalker to be my primary racer for this review.

Every character has different stats from the get-go. Some have better handling while others focus on higher top speeds. That… Really doesn’t mean much in the long run for reasons I’ll get to later. However, when it boils down to it, it just becomes a matter of picking your favorite racer (or the one that visually appeals to you the most) and heading off to race for the cup.

Since this is a classic racing game with multiple characters, you will unlock more racers as you win races across 25 different tracks on 8 unique worlds. You’ll also unlock the courses once you beat so there’s your challenge. 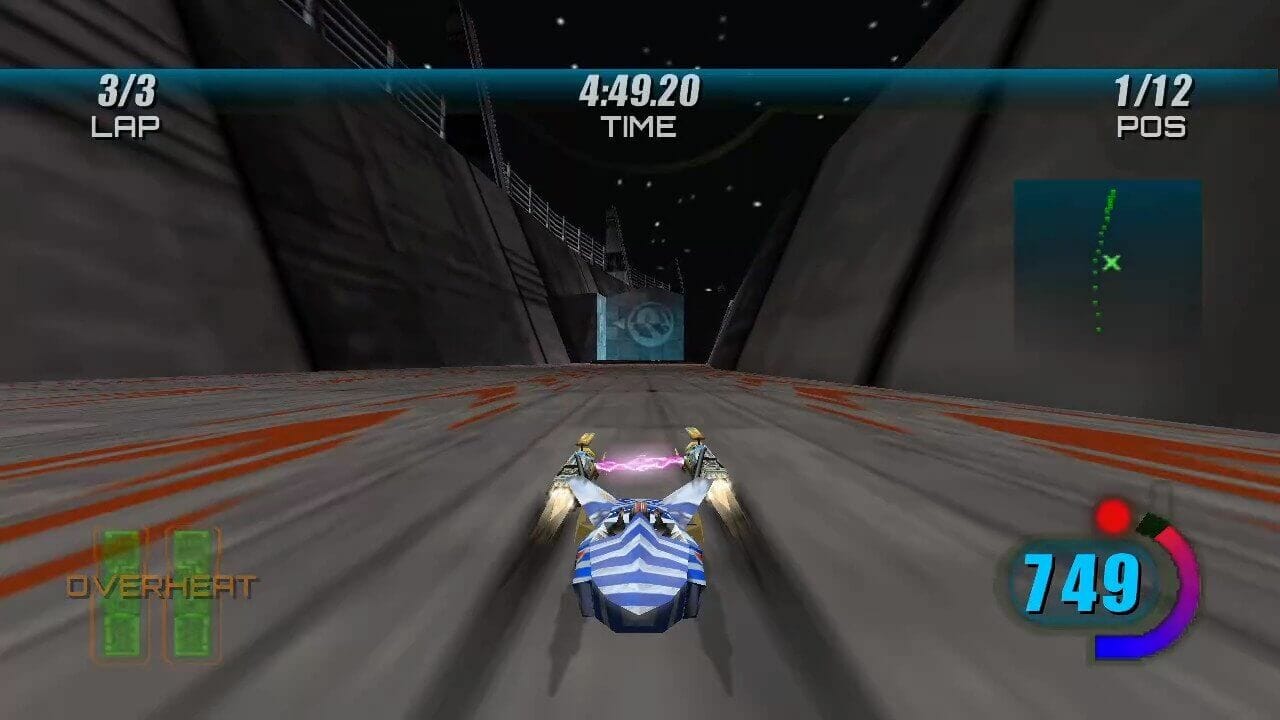 Boosting Through the Ranks

So, after you picked your favorite racer, it’s time to throw yourself into the race track! You accelerate by pressing ZR, use the Air Brakes with the B button, and powerslide with ZL. The player can steer the pod racer with the left analog stick while using the right stick to tilt the pod racer to the sides to squeeze through narrow corridors.

Since this is pod racing, though, we need to have some sort of boost mechanic. This is achieved by holding up on the left stick for a few seconds to charge your thrusters and pressing A to boost. Letting go of the stick before the meter fills up will make you lose any charge you’ve had, forcing you to start over.

While boosting, the pod racer’s temperature will rise. If left on for too long, one of the engines will catch on fire, forcing the player to slow down to address the issue. Yes, this means that you have to look out after the frontal thrusters of your racer. If you hit obstacles or other racers, the frontal thrusters will sustain damage. If you take too much damage you can have one of your engines explode, destroying the pod racer and costing you several seconds to respawn and continue racing.

You can repair your thrusters during the race by pressing the R button. However, this will actively slow you down until repairs are completed or stopped. As such, being smart about when to repair your damaged ship will help you avoid getting destroyed.

All the mechanics presented above provide players with a grueling risk vs reward system in which players are faced with tough choices in a frenetic environment. Do you boost through the straight paths and risk exploding from a collision because of a sudden turn? Are you willing to repair the engine that got set on fire and risk losing your first place?

The reward is worth it, though. Smart players will always be able to clear laps faster if they manage these elements perfectly. While the game isn’t clear on explaining how certain mechanics work, it can be an exhilarating experience once you figure everything out. Unfortunately, there are also times where you can die to random bullshit such as this:

Yeah, the main problem with Star Wars Episode 1 Racer… Eff it, I’ll refer to it as Star Water Racer now. The main problem with Star Water Racer is that it handles collisions in a pretty weird way. I’m sure it has to do with the speed at which you hit something. However, I’ve had many instances of me exploding just from running through the racetrack at a normal speed… It’s weird.

I don’t know what to attribute this problem to. However, I have had a lot of instances where I just explode out of nowhere… Not like that’s a major inconvenience because…

When I was a kid, I used to think that Star Water Racer was a very hard game. In reality, this perception stemmed from the fact that I didn’t figure out the controls to optimize your speed. I was a dumb kid, after all. So, you can picture young Ule falling off cliffs pretty frequently and coming dead last. However, now that I know how to play as a dumb adult, I found that there really isn’t much of a challenge in this game.

Is this a bad thing? Well, considering that the AI doesn’t rubber band and has a set path/speed to follow for each course, it’s pretty much a matter of outpacing it. The real challenge in Star Water Racer is, as usual in racing games, to find the shortcuts, avoid obstacles that will make you explode, and do it fast.

Some AI will definitely keep pace with you in the later courses, though. This makes any mistake (or just random spontaneous combustion) costly. At some points, you might be tempted to just restart the race altogether since once the CPU has the lead, it’s very unlikely you’ll make it back to 1st place. I mean, that is unless you pull off a perfect race which, considering the issues I mentioned earlier, you won’t.

Star Wars Episode 1 Racer is a pretty good licensed game and something retro gamers hold close to their hearts. However, I think that the game could’ve used some additional polish when porting it to modern systems. The unfortunate reality is that outside of the single-player content, there isn’t much to be done afterward.

Oddly enough, there’s no online component which would’ve revitalized the title for some audiences. But at the very least I still can dust off the game occasionally. Since this is a retro review, I won’t be giving a score to this game. But I definitely recommend it for those who want to take a trip down memory lane to a simpler time with simpler mechanics.

That’s it, really. Anakin Skywalker won the Boonta Classic and conquered the circuit as a champ. However, in the shadows, Sebulba is orchestrating his plans to take back his title. What could be next for the racers?

While we find out the answer to that, what do you think of our Star Wars Episode 1 Racer review? Are you going to get this game on the Nintendo Switch? Let us know your thoughts in the comments section below. For another Retro Star Wars review, check out our reviews on Battle for Naboo and Jedi Starfighter.