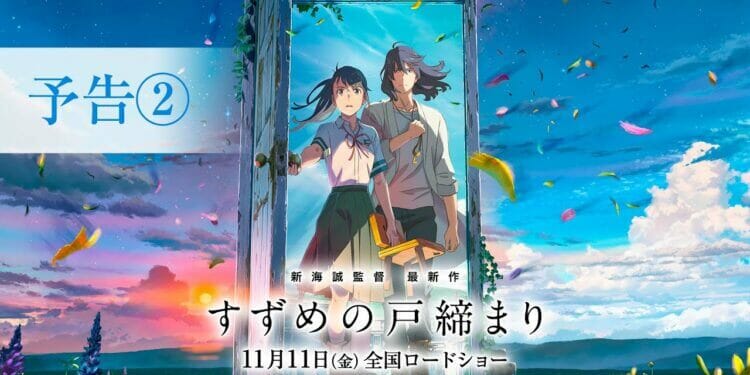 CoMix Wave Films, STORY, and TOHO revealed a new trailer for Makoto Shinkai’s upcoming anime film Suzume via Crunchyroll, alongside new Japanese cast members for the film. Suzume is set to premiere in Japanese movie theaters on November 11th, 2022, and will be distributed in all major territories beginning in early 2023. In North America, Crunchyroll is the sole distributor. In Latin America, Australia/New Zealand, the Middle East and portions of Europe, the film will be distributed by Crunchyroll and Sony Pictures Entertainment. In French- and German-speaking Europe, the film will be co-released by Crunchyroll, Sony Pictures and Wild Bunch International.

The full details via Crunchyroll can be seen below:

“Hey, do you know of a door in this area?” Souta asks Suzume as he encounters her for the first time. She then travels across Japan with Souta, who has been transformed into a chair following an interaction with the speaking cat nicknamed “AristoCat”, closing doors that are causing natural disasters. Suzume’s banter with the transformed Souta offers comic relief, while her meeting Chika and Rumi are heartwarming, and her determination as she must close the doors in Souta’s stead, all contribute in making this one of Shinkai Makoto’s masterpieces. Suzume’s iconic “I’ll see you later” in the trailer also expands our imagination.

Joining Nanoka Hara as Suzume Iwato and Hokuto Matsumura as Souta Munakata will be leading Japanese actress Eri Fukatsu as Suzume’s aunt, Tamaki Iwato, who lives with Suzume as her guardian, while working as a manager at a fishing company. Eri Fukatsu is known for her performance in “Villain (Akunin, 2010)” for which she won the Best Actress Award at the Montreal World Film Festival as well as the Japan Academy Prize for Outstanding Performance by an Actress in a Leading Role, and has most recently starred in the TV drama, “Come Come Everybody.”

Joining her will be Kabuki actor Hakuo Matsumoto, who will be playing Souta’s grandfather and Master Closer Hitsujiro Munakata, who is stern and cold but cares deeply for Souta. Hakuo has had a decorated career in other disciplines including stage plays and TV dramas, most notably the “Man of La Mancha” stage play adaptation, which launched his career on the stage for over 50 years.

“In spite of my lack of experience, Director Shinkai and the rest of the crew poured everything into this project, which will be reflected in the emotion delivered straight into the hearts of audiences around the world.” Hakuo added, “It was my first time playing a character in an anime film, and Director Shinkai did a wonderful job of guiding me through to the best performances. He was very friendly and kept a positive mood during production, for which I am very grateful.”

FULL CHARACTER PROFILES AND COMMENTS FROM THE TEAM MEMBERS

Suzume’s aunt who works at a local fishing company. She lives with Suzume as her guardian, but can be a little overprotective at times.

“To breathe life into Suzume’s aunt Tamaki by giving her a voice, I humbly took up the challenge despite it being my first time working on a project like this. In spite of my lack of experience, Director Shinkai and the rest of the crew poured everything into this project, which will be reflected in the emotion delivered straight into the hearts of audiences around the world. Helping deliver that is my mission for ‘Suzume’ and I intend to leave nothing on the table.”

He works at a local fishing company in the town where Suzume lives and is Tamaki’s coworker. He has a one-sided crush on Tamaki.

“Never did I imagine myself participating in ‘Suzume,’ when I first saw the trailer in theaters. Director Shinkai is subtle yet precise in his approach, and I am honored to be a part of the dynamic worlds he creates.

The character I play in this film, Minoru, is a fresh, pure and honest soul, and is like a metaphor embodying the town’s spirit where Suzume is from. I hope that everyone has the chance to see this movie in theaters and find out what adventure awaits on the other side of the door.

I have no doubt that everyone will be drawn into this magnificent world.”

A single-mother raising young twins and runs a bar in Kobe city. She picks up Suzume who was hitchhiking on the side of the street.

“My first reaction when I saw the trailer for ‘Suzume’ in theaters was, ‘Yes! Finally, another Shinkai film!’ and was in 100% audience mode. Little did I know I was about to receive an offer to play a character in this wonderful film. You can imagine my surprise, LOL.

I never imagined myself jumping into Shinkai’s world. The character I play, Rumi, is a strong, bright, lively and caring woman, so as I was reading her lines and going into character, I could feel my mind at ease.

Makoto Shinkai’s direction was very courteous and delicate in some ways that made me want to rise to the occasion of performing my character as well as I could. Recording in the sound booth was an absolute joy, but now that we’re done, I’m back to being a member of the audience, eagerly awaiting the film’s release.”

The energetic high school girl Suzume encounters in Ehime Prefecture, who is the same age as Suzume. Her family runs a local inn.

“My audition was my first time voice acting, so I was honored to have Director Shinkai guide me through my performance. When I heard that I got the role, I remember thinking, ‘Are you sure I’m the one?’ but was ecstatic nonetheless.

Chika is a junior in high school from Ehime Prefecture and encounters Suzume on her journey. She’s someone Suzume can lean on, while also nudging Suzume forward. The recording process was so much fun because I got to go into such a bright and energetic character.

No matter the age, this is a film that gives people courage and helps you reaffirm your love for one another. It will mean different things to different people. I’m honored to be a part of such a wonderful film.”

Suzume’s mother. She’s an amazing cook and craftsperson who can carve almost anything out of wood. She’s also Tamaki’s older sister.

“I’m delighted to once again be cast in one of Makoto Shinkai’s films. My character, Tsubame, is a cheerful and lively woman who is also Tsubame’s mother. And, she has very strong ties to that chair that Suzume used when she was little.

I took great care in performing the memorable ‘slice-of-life’ scenes throughout the film. I thought Suzume was lovely as she ventured out on her ‘journey to close doors’ while discovering herself along the way. This film is a must-see in theaters!”

Souta’s grandfather. He is also Souta’s mentor and master when it comes to their profession of “Closing” doors. However, he is currently in a hospital in Tokyo.

“It was my first time playing a character in an anime film, and Director Shinkai did a wonderful job of guiding me through to the best performance. He was very friendly and kept a positive mood during production, for which I am very grateful.

Hitsujiro was a difficult character to play. The director’s first words were, ‘This character needs to be dignified, with class’ and I thought over and over to myself, what ‘class’ meant in my performance.

The team members on the project were all amazing and treated me so well on set. I cannot wait for the November 11 release of the film, and hope everyone is as excited as I am.”

The latest film from visionary director Makoto Shinkai, behind the box office hits, “Your Name.” and “Weathering With You.”

Suzume is voiced by up-and-coming talent, Nanoka Hara, who was cast over her 1,700 peers who also auditioned for the role. What lay waiting for Suzume and Nanoka is a new adventure no one has seen. New encounters and farewells among the various challenges they face in the film. Yet, their journey to press on will be a ray of light for all of us who live side-by-side with uncertainty and restraint.

Joining her is Hokuto Matsumura playing Souta, who was cast for his abundance of “inner calm.” In Suzume, he had the monumental task of voicing a chair, which he did brilliantly.

For the music, Makoto Shinkai is once more joined by RADWIMPS, and international composer Kazuma Jinnouchi, who has scored several Hollywood films, video games and anime series. The dream-team to bring the world to life through their music. Singing the main theme song is TikTok sensation, Toaka, who brings a unique voice like none other.

The story about closing doors will connect the past, present and future in a way that audiences will never forget.