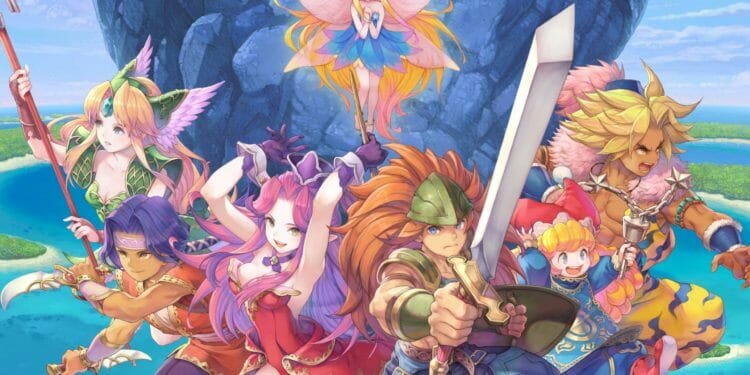 The new remake by Square Enix, Trials of Mana, recently released new gameplay featuring the water Benevodon boss fight. To those unfamiliar, Trials of Mana is a remake of Seiken Densetsuho, a JRPG released in Japan 1995. The series was officially released in the west in 2019 as part of the Collection of Mana on Nintendo Switch.
The 20-minute video includes a party of Riesz and other with some detailed exploration around the world that shows off the map and a look at the remake visuals.

Whats In The Trailer?

The trailer also showcases some more bits of gameplay, such as a look at the menu and AI system workings. Similar to the original Trials of Mana games, players are able to switch between party members at any given time in battle. We also get to see some dungeon exploration revealing some flashy visuals and looking quite different from the original.

To end the trailer, we are shown a fight against a Benevodon; strong enemy types from the original games that serve as bosses. The specific Benevodon shown in the trailer is Fiegmund, the Water Benevodon. It’s also easy to note that both the party and the boss are level 42, so it seems the gameplay shown this far is still a way in. Though the remake looks incredible, it was sadly reported that it would not include multiplayer functionality, unlike its original counterpart.

Trials of Mana were first released at E3 2019 and will release April 20th on PlayStation 4, PC, and Nintendo Switch.

Are you looking forward to the release of Trials Of Mana? Let us know your thoughts in the comments section below.