Relive your duties as a hospital manager with tons of content!

If you are passionate about management video games and you also work in the health sector, you must know about Theme Hospital. The game released on PC in 1997. The franchise has actually remained silent for over twenty years. In 2018, however, Two Point Studios released Two Point Hospital. The game arrived only on PC and then, at the beginning of 2020, even on PlayStation 4, Xbox One, and Nintendo Switch consoles. In recent days, however, the Jumbo Edition has also arrived on the console which, besides the basic title, also includes all the DLCs and expansions. If you are ready to immerse yourself in the zany world created by Two Point Studios, sit down and grab something to eat. Here is my Two Point Hospital: Jumbo Edition review on PlayStation 4! If you think you face a very simple hospital management system in an isometric view, I already recommend that you change your perspective. Yes, it is true that Two Point Hospital basically incorporates all the stylistic features of the genre. However, what the guys at Two Point Studios have done is give a true spiritual sequel to the madness of Theme Hospital. Take note that the basic title consists of 15 different levels.

They set each level in a different hospital, which offers a level of difficulty gradually increasing. You will progressively unlock new challenges and alternative ways of conceiving care in a riot of unconventional therapies, with the one and only certainty that you will hardly end up in bankruptcy. This is because, even in the management of the most complex situations, Two Point Hospital is never really difficult. Unless you make really risky choices, you cannot run out of your budget.

Initially, you will only manage a few small GP’s offices, a medium-sized ward, and low-level diagnostics. Take note that as the hours go on, the situation will clear up in a more complex way. Get ready to welcome a herd of crazed Clowns or people who think they are Freddie Mercury. You must admit these people in rooms for Jest Infection and Psychiatry. If you don’t admit patients in their appropriate rooms, your hospital is in danger of collapse.

The actual construction of the hospital is very fun. However, the most interesting and certainly engaging part of Two Point Hospital is the management of the staff. There are four types that you can hire: Doctors, Nurses, Janitors, and Assistants. Each of these categories will be fundamental in the continuation of the various activities and in the advancement of your earnings. It will therefore be your task, as an excellent manager, to satisfy their requests. Take note that you will start with the construction of simple bathrooms. Afterwards you can build rooms for the relaxation of the staff on break and gradually work yourself up towards training and professional advancement. However, I have unfortunately noticed that Two Point Hospital’s Artificial Intelligence is not very collaborative. You will always have to closely monitor each room. Your employees regularly go on a break or forget to go back to work one too many times.

Each level, and therefore each hospital, will allow you, by completing the various challenges that the game will put before you, to unlock additional rooms and new machinery. Your goal will initially be to bring each facility to the highest of its reputation and level. You must satisfy both the demands and needs of patients and staff, but also distinguished personalities that are visiting. From national radio, the inspector on duty, to the minister of health.

There will be many figures who, from time to time, will pop up with surprise visits. To impress them, simply enlarge the structure by purchasing the adjoining lots. You can also decorate the walls and corridors of your hospital with posters, statues, and plants. Pay attention to the climate of the area and therefore positioning radiators or air conditioners where necessary. Take note that this will give a nice boost to your finances and reputation in Two Point Studios’ title.

How does a management system born for PC, therefore based on the use of the mouse, behave on the consoles that instead use the increasingly uncomfortable (in these cases) controller? In a nutshell: to perfection. While the game interface may initially seem too cumbersome and elaborate, it will only take you a few minutes of gameplay to understand all the menus and submenus. The command management is quite simple, and I rarely got confused between the various keys to call up the desired menu.

The list of objectives is always in the foreground, so even novices cannot fail to understand “what to do” in a given context. The only minor flaw that I could notice is the lower accuracy of the pointer on the screen compared to the result that you would have with a mouse on a PC. Nothing too bad in reality. Sometimes you may select the wrong staff member, but nothing will ever be able to ruin the overall experience. 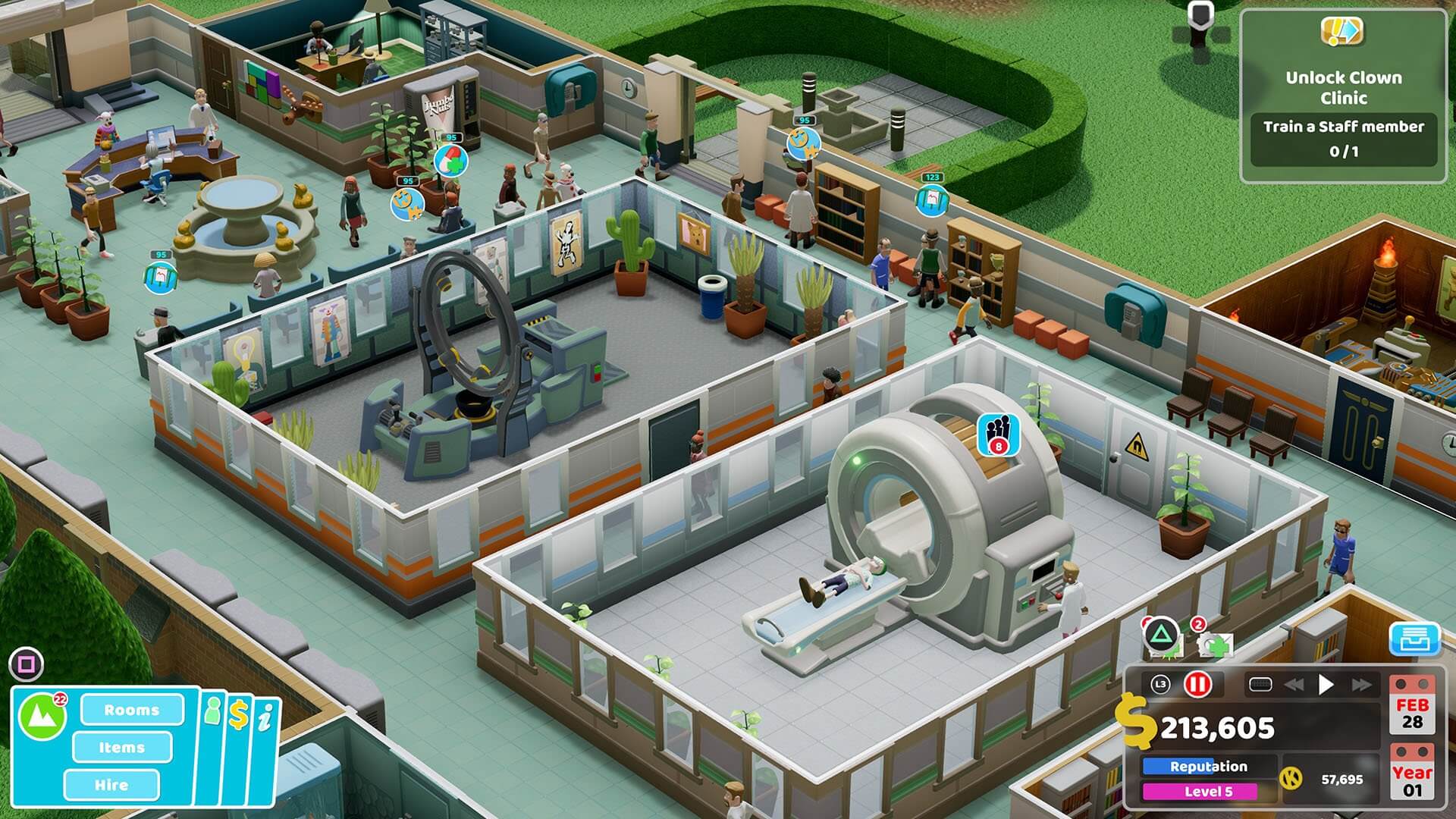 Two Point Hospital: Jumbo Edition brings with it all the additional content released. Besides the tons of free items that you can add to your inventory, there are four actual DLCs available in this version: Bigfoot, Pebberley Island, Close Encounters, and Off the Grid. Take note that I won’t talk about all the details of the various DLCs. However, just know that the four new areas are all different from each other and introduce completely unique mechanics, rooms, and objects.

If you are a veteran of Two Point Studios’ Two Point Hospital and bought the Jumbo Edition on consoles, you will find yourself in trouble for a moment. The reason is obvious. All the DLCs will not be accessible in the first few hours of the game. It will only be available when you arrive in the advanced stages. However, this will not be a big problem for novices.

My review of Two Point Hospital: Jumbo Edition took place on a PlayStation 4 Pro. Last year I could also play it on Nintendo Switch without the additional content. From a purely aesthetic point of view, the title of Two Point Studios is extremely colorful, with deformed models of human beings really well made and distinguishable. The level of detail is excellent, considering the genre. The customization possibilities do not derive only from the quantity of objects available, but also from their diversification.

A soundtrack that does its job very well accompanied all this with diversified and mixed tracks from the game radio. Technically, the title on PlayStation 4 runs very well, without those annoying frame rate drops in the Nintendo Switch version. The only inexplicable flaw is the really long loading and saving times that are often up to twenty seconds. I really hoped that they would fix it with the Jumbo Edition. This was not the case, too bad! 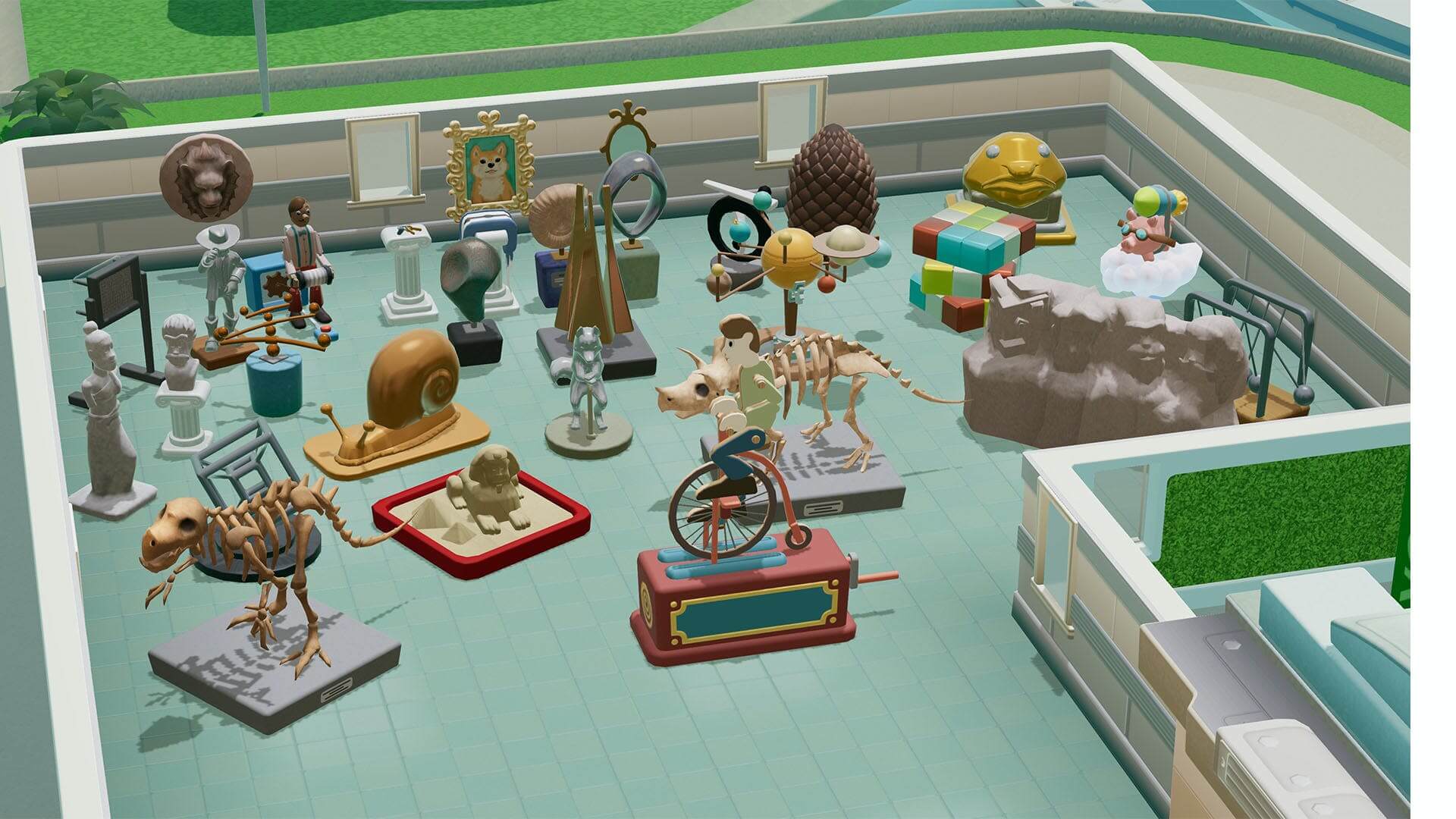 This is the most exaggerated, funny, and crazy game you can imagine. The level of challenge is perfect. However, the game gradually gets more and more intricate and full of emergencies that will suck you into a whirlwind of enthusiasm and fun that I have rarely experienced with other titles of the genre.