Start your mafia empire and take control of Chicago!

If you are a fan of first-person shooters, you will definitely know John Romero, co-founder of idSoftware and one of the fathers of DOOM and Quake. The game designer has worked for several companies over the years, and in 2015 he started Romero Games with his wife. The software house has worked on several minor projects but has now finally released a big cross-platform title: Empire of Sin. Will the great Romero be able to hit the target with this strategic-management title set in Chicago of the 20s? Here is my Empire of Sin review on PC.

In Empire of Sin, you will have to take on the role of the greatest Mafia bosses of the 1920s and fight with the other factions for complete control of Chicago. In total, there are 14 bosses available. Some, like Al Capone or Frank Ragen, are inspired by actual people, while others are completely invented from scratch.

Each of these characters has unique traits, abilities, and backgrounds, which will influence how you play your game. For example, some bosses could get greater advantages by entering into diplomatic agreements with rival clans, while it leads others to use more brutal and direct methods to dominate the city of Chicago.

Furthermore, although the title is based on individual customizable matches and not on dedicated campaigns, during the game each character will have the opportunity to carry out a primary mission based on his background. Take note that this will have different outcomes based on the choices made. All this will allow you to get to know your protagonist in depth and to identify with him much better during the game. 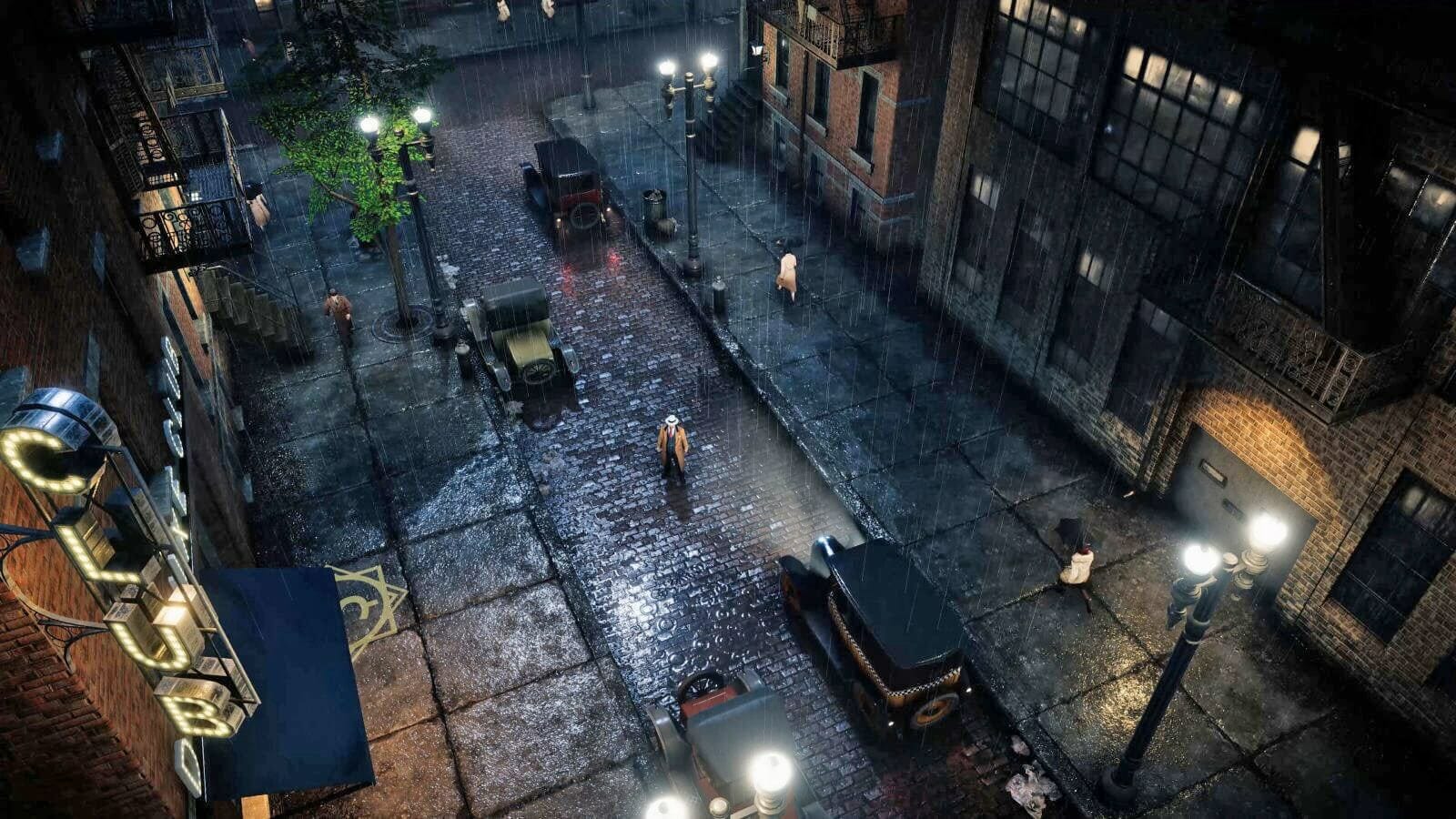 To win a game of Empire of Sin, you will have to eliminate all the other bosses from Chicago, but to do so you will need a lot of money. The primary method of earning money in the game is obviously to create your own crime empire. Chicago is full of activities that you can master and then turn them into racketeering capable of filling your pockets over time.

Structures can be bought legally, but in most cases you will forcibly steal them from rival gangs or small, disorganized groups of criminals. Once you have gained control of a business, you can decide to spend some money to convert it into a specific racket or keep the previous one for free. In total, there are four different types of rackets: the distilleries used for the production of alcohol, the speakeasies that deal with reselling it to the public, the casinos, and finally the brothels.

Besides these structures that will guarantee you a constant income, you can also create hotels that will increase the number of customers in your neighborhood and safe houses from which to manage everything. You can upgrade these facilities to offer higher returns, more varied production, or higher security. This is where the management side of Empire of Sin comes into play.

During Romero Games’ title, you will have to decide carefully how to spend your money, for example, to be able to produce the most requested type of liquor in your neighborhood or perhaps improve the attractiveness of your brothels. Furthermore, it is also important to arrange the various rackets homogeneously, so that they do not compete with each other.

Unfortunately, however, the management side of the game is not very useful, since to enrich yourself you will not need to dedicate yourself to it in the slightest. Given their high cost, the improvements almost never offer serious advantages and by simply conquering new rackets around the city you will be able to earn a lot of money in a short time. 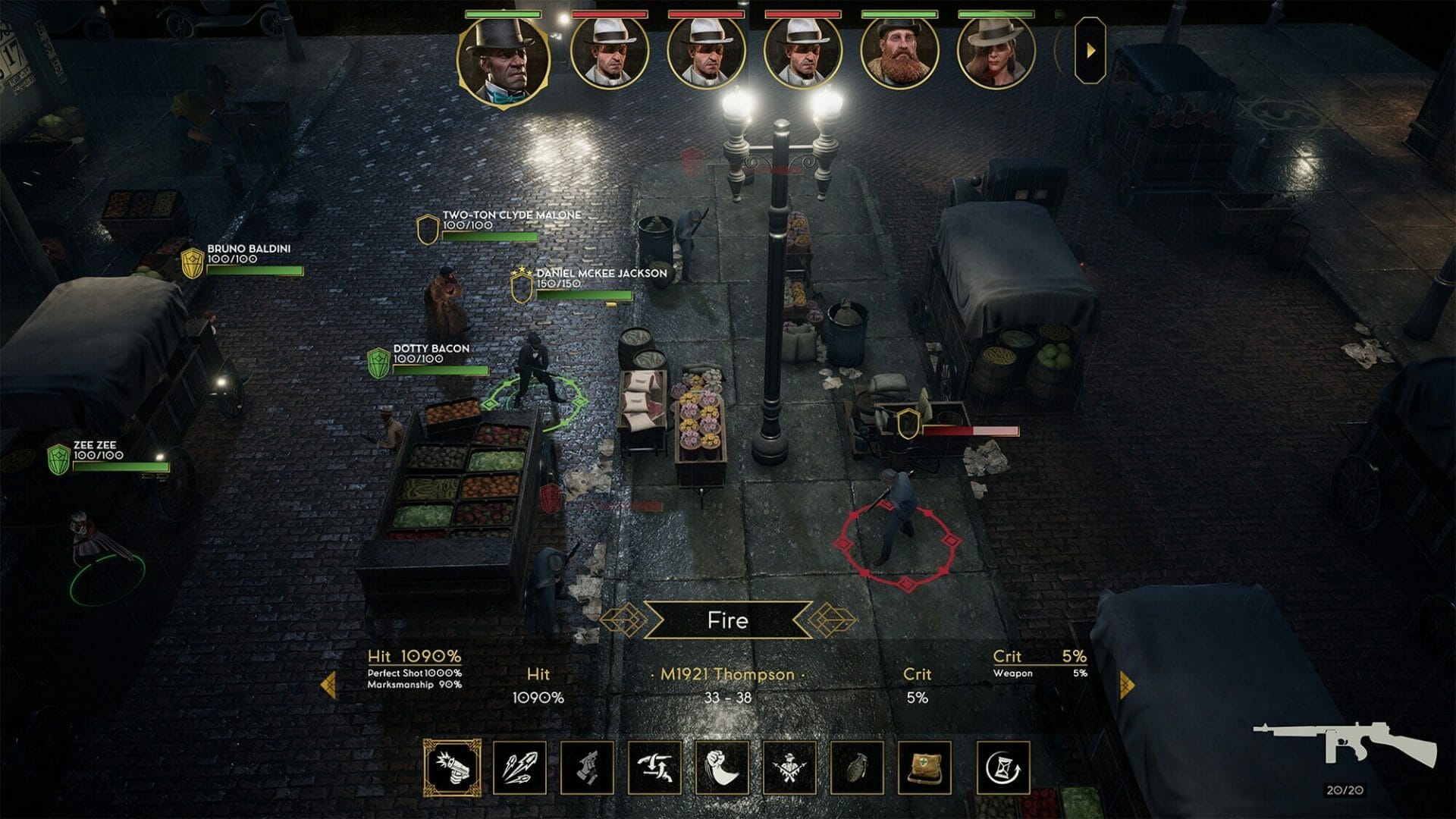 Even if your goal is to take over the entire Chicago, it’s not wise at all to take down rival gangs from the start. Before you go on the attack, you will have to prepare yourself enough, and in the meantime it is wise to make some agreements with your rivals. For example, you can sign non-aggression pacts, trade agreements, defensive alliances, and so on.

However, this aspect of the title also does not offer many advantages in the game. Except for the very early stages of the game, relationships with other factions will only be a nuisance and you will be able to progress faster simply by ignoring them. Fortunately, however, relations between the various gangsters are managed much better.

During the game you will have the opportunity to recruit different gangsters and, just like the bosses, each of them will have their own story that you can deepen with side missions. Furthermore, all of these characters will have established ties with other prominent figures in Chicago. For example, some may be friends of gangsters belonging to other factions, or even their lovers.

To get the most out of your team, it’s essential to find people who get along well together and try to increase their loyalty. If your companions are loyal to you, they will have bonuses in combat and will be less likely to betray you. Just remember to check who are the prominent members of a faction before attacking it, as the gangsters will refuse to attack loved ones and may rebel if you end up killing them. 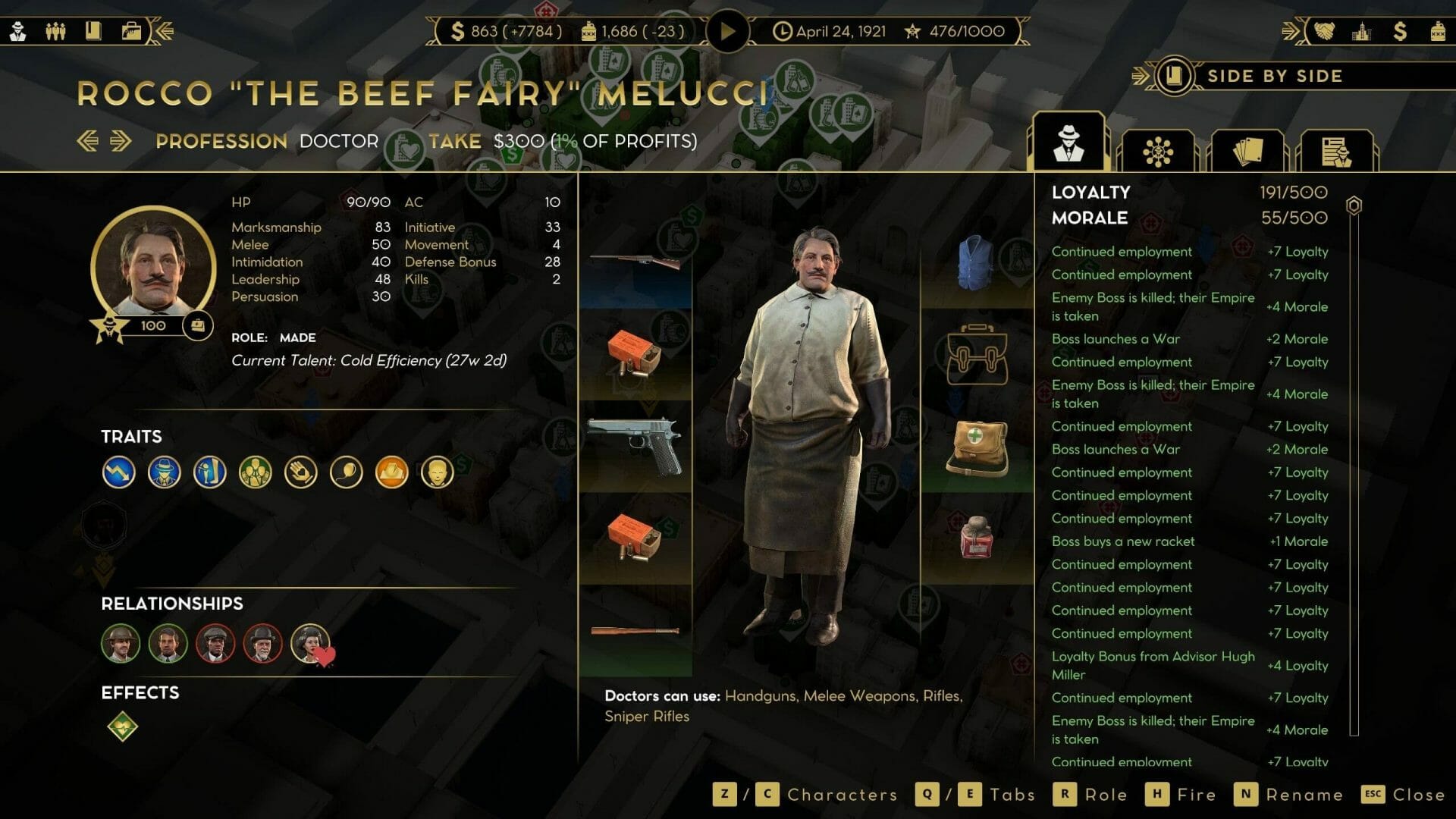 Now let’s move on to one of the most important points of my Empire of Sin review: the combat system. The title has a very classic turn-based combat system, where all the characters act in order based on their initiative value. Whenever it is the turn of one of your gangsters, you can perform various actions such as attacking, moving towards cover, using special equipment, and so on.

In addition, depending on the class of your characters and their equipment, you can also use many special abilities. You will require action Points to perform any of these actions, and normally each character begins his turn with two of these points. The combat system is very reminiscent of the one used in the XCOM series but, compared to 2K games, it is much less complex.

The AI ​​of the opponents is extremely limited, and for this reason they will often carry out really stupid and counterproductive actions. Skills are also very limited, as they all rely on performing simple actions such as area attacks or heals. In addition, the maps used for combat are small, simple, and always built on a single level, thus limiting the strategic possibilities.

As for the artistic aspect, Romero Games’ Empire of Sin immediately immerses the player in the fascinating Chicago of prohibition. The design of the characters, the music, and the settings seem to come directly from that era and create a truly exceptional atmosphere. Unfortunately, everything is promptly ruined because of the many technical problems that plague the game. Flying over the graphics sector, very lacking both in terms of textures and models, the real problem of Empire of Sin are the bugs.

The title is infested with an outrageous amount of technical problems related to almost every aspect of the game. There are characters who can’t use cover, shops that don’t work, missions that can’t continue, movement problems, errors in attack accuracy rates, and so on. All these bugs seriously damage the gaming experience and make it really difficult to immerse yourself in the beautiful setting of the title. 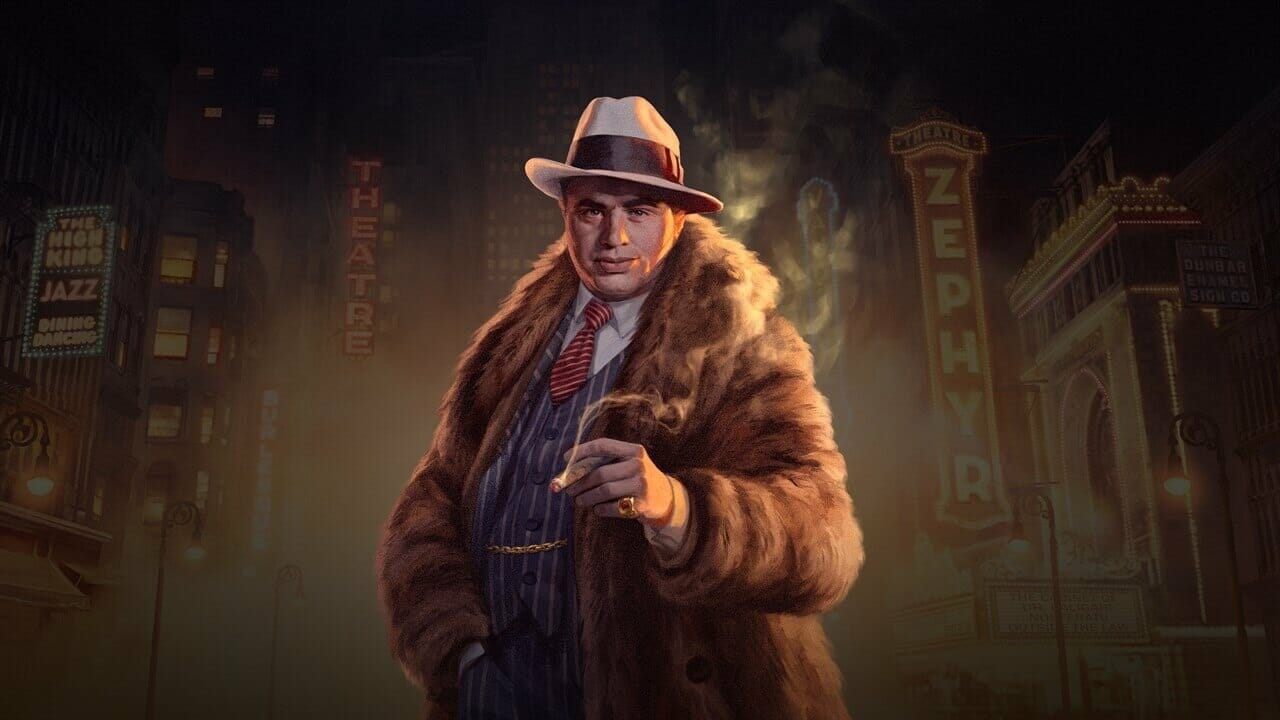 Do you want to try Romero Games and Paradox Interactive’s Empire of Sin? What do you think of my Empire of Sin review on PC? Please leave your thoughts in the comments below. Are you interested in more games? Check out our reviews for Football Manager 2021, NBA 2K21 PS5, Hyrule Warriors: Age of Calamity, Yakuza: Like a Dragon, and Pikmin 3 Deluxe.

Empire of Sin suffers a lot when it comes to the actual gameplay. Most of the mechanics lack depth and the numerous bugs worsen the overall quality even more. If you are a big fan of this particular historical period you might find something in Empire of Sin, but you will probably be disappointed.