An almost unchanged version, but still better than 2020!

By now we all know, the last months of each year are marked by football games. After FIFA and Pro Evolution Soccer, Football Manager also releases its latest version on the market. The most played managerial game ever this year promises innovations and improvements to make the gaming and managing experience even more complete. Did Sports Interactive succeed in its intent? Here is my Football Manager 2021 review on PC.

LEADER IN ITS FIELD

If you’re reading this Football Manager 2021 review, the FM series shouldn’t need any introduction, but I still prefer to do a quick recap for newcomers to the game. Football Manager has been an undisputed leading football manager game in its field for over 20 years. While the heart of the game is playing the role of a coach intent on climbing to the top of the world, much more is hidden under the hood of this game.

Besides coaching, the player will also have to devote himself to collateral activities such as relations with the press, transfer market, and much more. Football Manager is therefore a deep and complex title, at times even too much, but thanks to the improvements made over the years it has allowed more and more possibilities to manage and personalize the experience at the helm of the club.

Having entered the franchise perspective, let’s get ready to discover this new chapter of the series together. You start the game by creating your coach, then you choose whether to start with a club or go in as “unemployed” and wait for a proposal from some team. Once you have chosen your preferred mode and signed the contract, you are ready to get to the heart of the game. 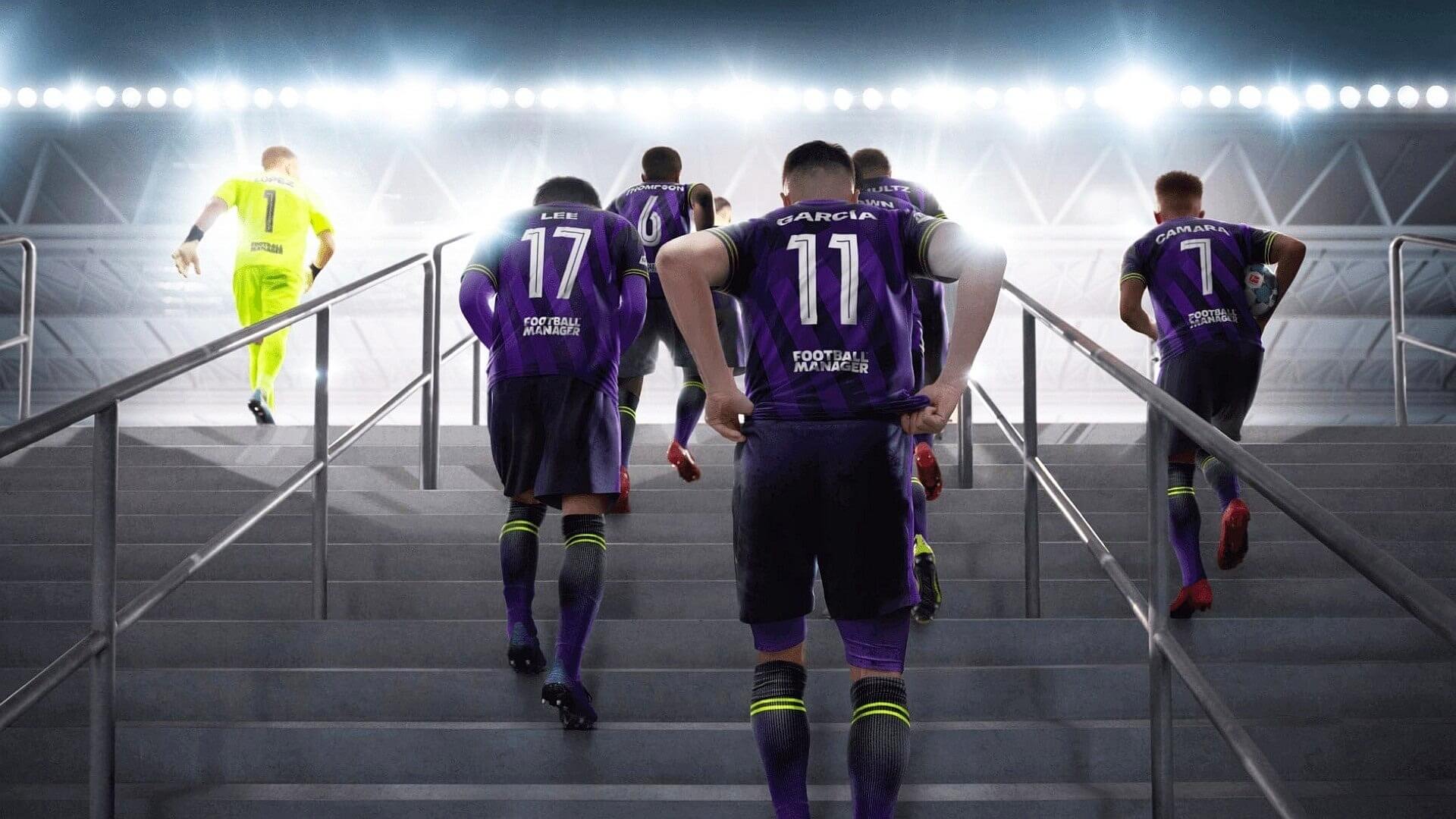 After a few hours in Football Manager 2021, you will realize that one of the most interesting aspects of the game lies in the new way that you can manage your personal relationships with staff and journalists. As already known, interactions are usually a fundamental aspect of a manager’s day, however, this year Sports Interactive has given this mode a big shake up.

This year it is possible, for example, by talking with the players, to choose the “body language” that will accompany your speeches in the locker room. You can therefore decide whether to be a coach with an iron fist like Mourinho or a more diplomat like Claudio Ranieri.

Staying in the field of relations with players, this year it is also possible to tell a player on your team to convince another player to join your team. For example, if you want to buy a Brazilian jewel, you can ask Neymar to convince him to talk about a possible transfer.

Sports Interactive have also applied these alternative ways of interacting to communications with the press, with the addition of a “feedback” screen that shows you the reactions of journalists to your words in real time. As every year, I must say that the dialogues with the press are monotonous and cloying after a short time, but as per tradition there is the option to delegate your assistant coach to carry out the most boring tasks. 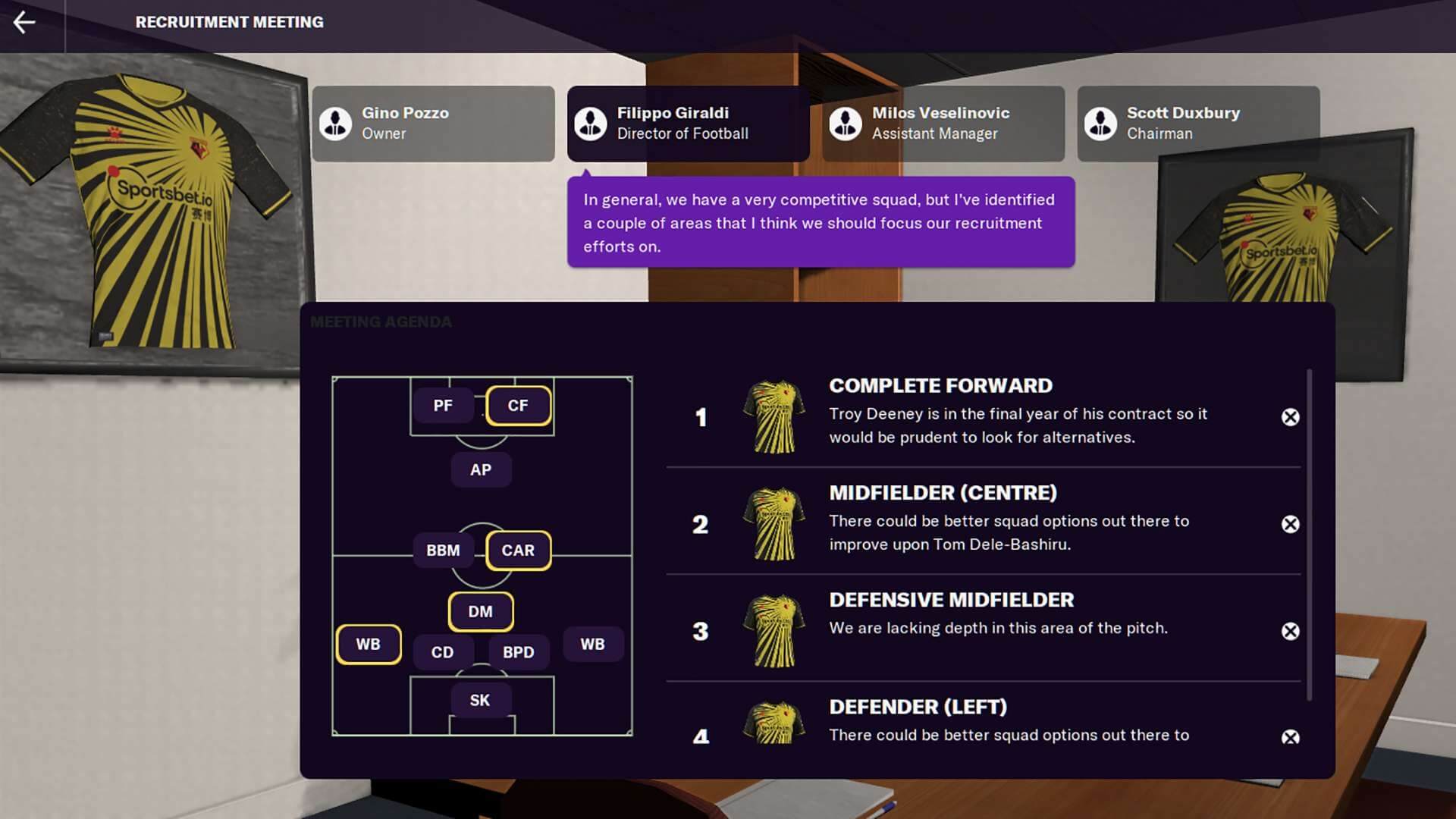 This year in Football Manager 2021 you will definitely see the proof of the commitment of the developers in deepening and modernizing a title that feels the weight of the years. First of all, the streamlining of the management of menus and submenus is clear. You can find the same clarity over at Captain Spin if you want to take a break and try to earn some cash.

By interacting with any counterpart, an overlay window will now open from which to manage the interactions with extreme simplicity, without having to jump between dozens of menus. On the preparation side of the match, however, a new screen has been implemented with the analysis of the opponents, with the probable lineup and suggestions from the staff.

Once on the pitch you will notice a small restyling of the interface which sees a slightly more orderly organization of the controls during the matches. All this was probably designed to make the gaming experience more accessible, even to newbies. As per tradition, Football Manager is a complex title and not always accessible to everyone.

This doesn’t mean that the game isn’t enjoyable, but it might take a while to get into full swing. Also, this year some operations remain rather confusing, thanks to an aesthetic look that is now a bit dated. In case of difficulty, however, it is always possible to decide to approach the career in a lighter way, delegating many of the operations to the staff as mentioned earlier. 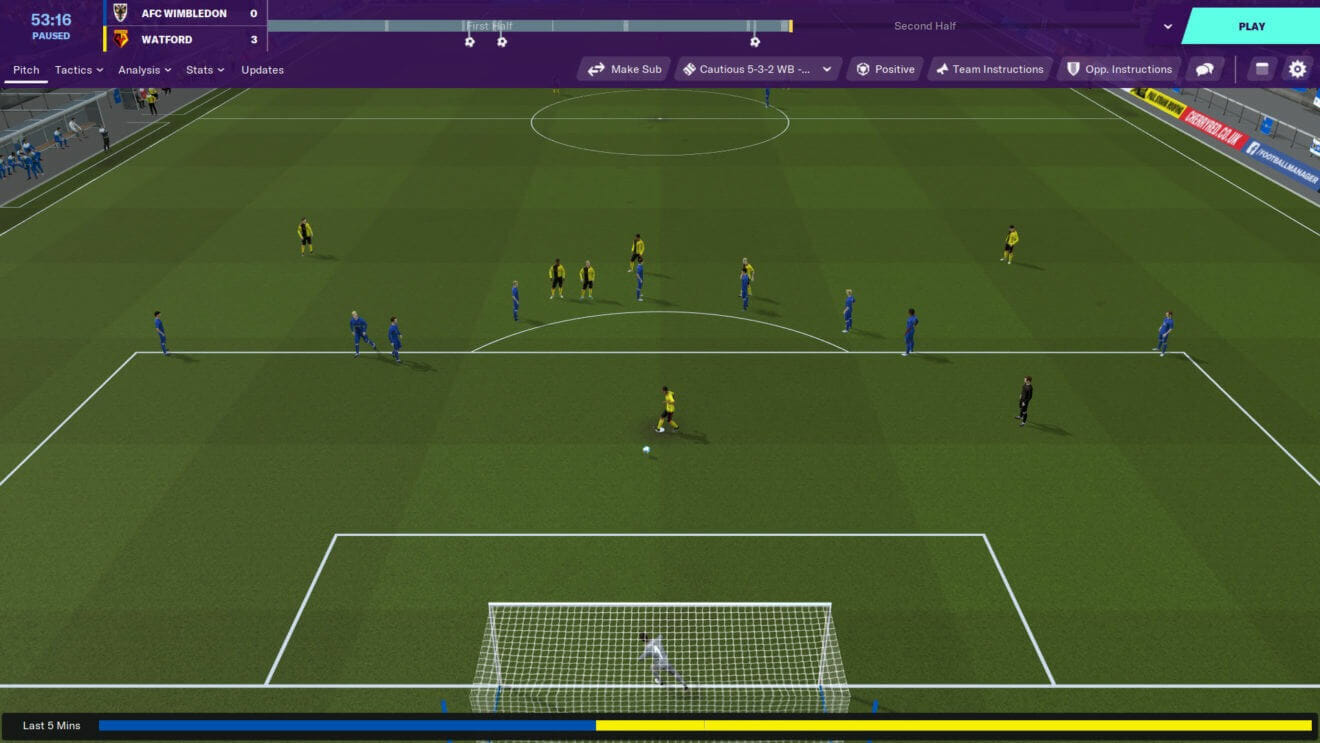 Going on the pitch at the helm of the team, as already mentioned, you will notice a much more ordered match management menu. The management of formations and tactics has also been slightly improved, with more information on the status of the players and the match in progress.

Despite this, the randomness of the results still remains a stumbling block to overcome, and during the season it runs into absolutely unthinkable results (for better or for worse). However, I am confident in a corrective patch soon. Technically, Football Manager 2021 remains almost unchanged from its predecessor.

It’s nice to notice some small things like aesthetic improvements, scenes that accompany season endings and important matches, and small aesthetic finishes. Also, they improved the VAR animations and some camera movements. The game’s 3D engine is also slightly tweaked. Players on the pitch will enjoy several new animations, and the game’s AI makes matches slightly more realistic than in the 2020 version.

Like every year, Sports Interactive confirm Football Manager 2021 as a huge, deep, and complex title, which certainly takes more than a few days to understand, but which promises an absolutely high-level simulation experience. Newbies, therefore, will have to deal with the obstacle of an experience that is still not too user friendly, but still simplified compared to the last chapter. The absolutely affordable price, as well as the minimum system requirements, make FM21 a recommended title for all football fans.

Do you want to try Sports Interactive’s Football Manager 2021? What do you think of my Football Manager 2021 review on PC? Please leave your thoughts in the comments below. Are you interested in more games? Check out our reviews for NBA 2K21 PS5, Hyrule Warriors: Age of Calamity, Yakuza: Like a Dragon, Destiny 2: Beyond Light, and Pikmin 3 Deluxe.

It is clear that Sports Interactive is constantly looking for perfection, in a title that is now starting to feel the weight of the years. Perfection not yet achieved, but certainly closer thanks to the efforts and dedication of the development team.