A Tale Of Death and Coffee

by Abdul Saad
in PC Reviews
0

In terms of story, I’d say Necrobarista is perhaps the best game I’ve played this year so far. The anime-styled visual novel succeeds in tugging at the player’s heartstrings in the most profound and thought-provoking way possible. 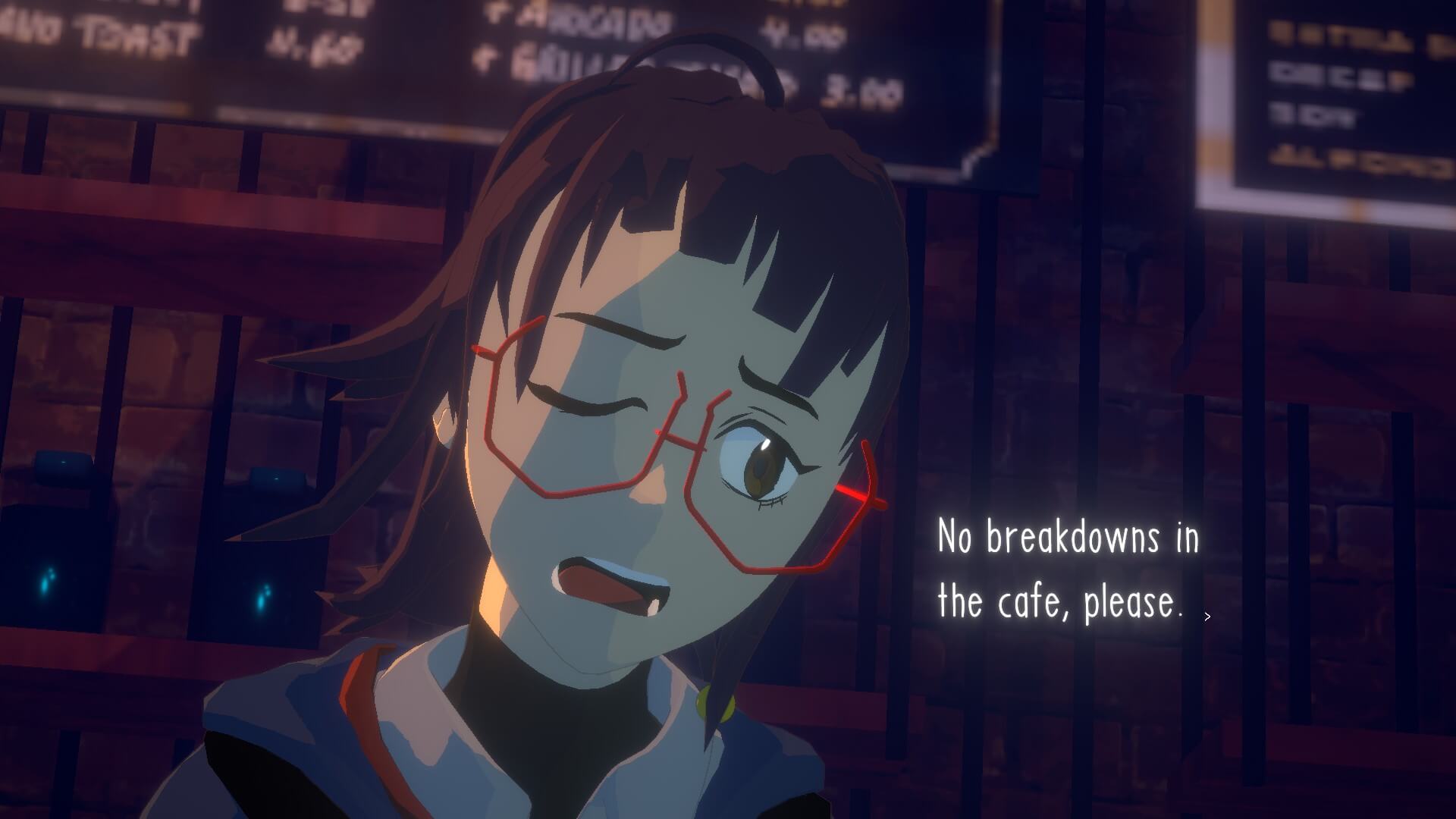 Necrobarista takes place in Melbourne Australia and follows our main heroine and the titular Necrobarista Maddy. She runs a cafe called The Terminal, which incidentally is also a stopping point for the recently deceased to knock back a Cuppa or two within 24 hours before passing on. She runs the cafe with the help of her mysterious mentor Chay, and the enigmatic and energetic genius Ashley. However, those aren’t the only characters we’re introduced to, as we also meet a gruff older gent with a past named Ned and Kishan, the newest deceased patron of The Terminal.

The story takes place where Maddy and the crew are about to undergo a mysterious and forbidden ritual. The opening sets quite the tone for the story and an excellent way to pull the player’s interest with some mystery and well-matched music.

We are then taken back some days earlier where we’re introduced to Kishan, a recently deceased costumer. He has a hard time trying to come to terms with his current state of affairs, and rightly so too. His reactions are realistically represented and the discussions between him and Maddy are genuine enough to be sympathetic and even make you reflect on the subject of death yourself. 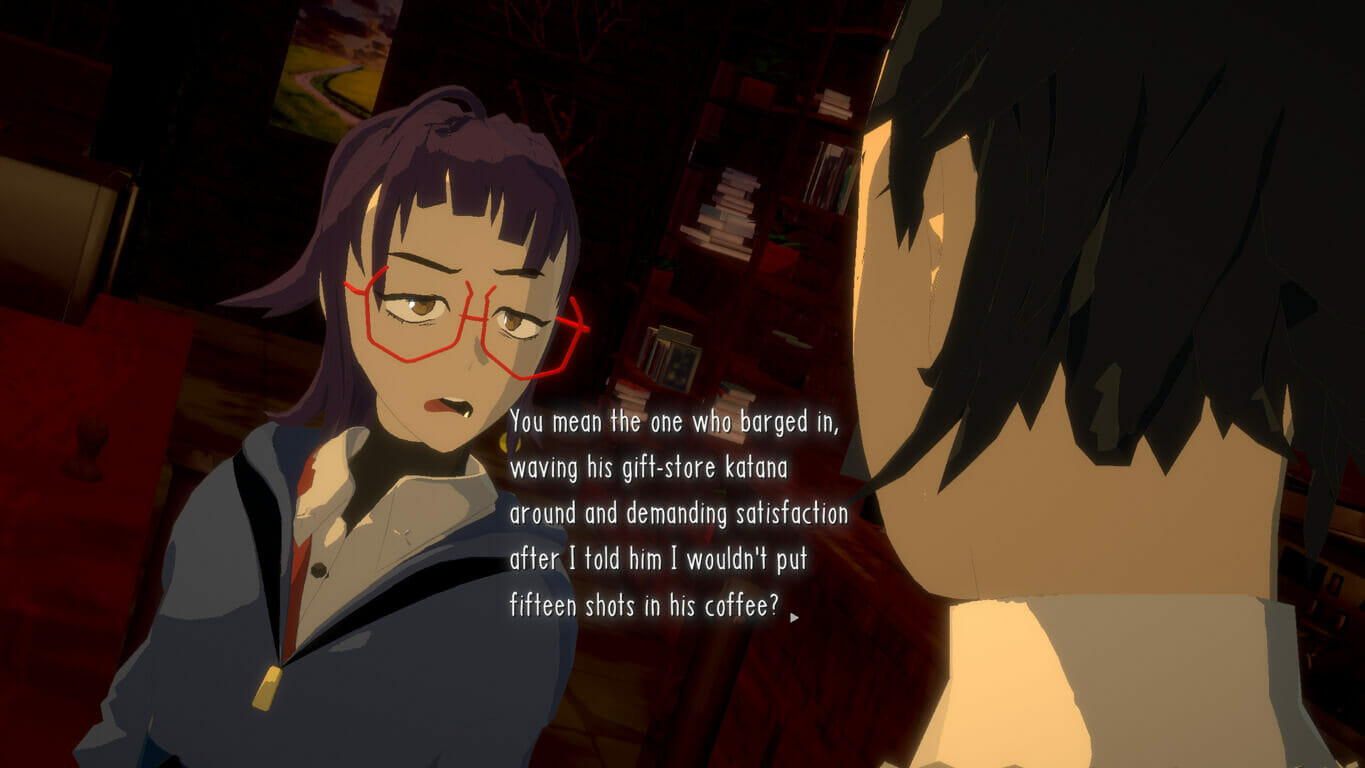 My favorite part of Necrobarista, by far, is the interactions between these characters. As just an observer in the game with no interaction or influence in the story whatsoever, the game makes being just an observer quite comfortable. Watching the entertaining and genuine conversations between these characters you’d almost forget they aren’t real people. The banter is excellent, and the discussions are profound. It’s hard to think of any other game or even any other visual novel that does dialogue quite like Necrobarista.

Another part of the game that makes being an observer comfortable is the excellent anime-styled visuals. Necrobarista is quite frankly the most visual, visual novel I’ve ever played with a unique aesthetic. Though the only nitpick I have with the graphics is that the character movements are quite slow, which more so signifies a lack of resources than graphical fidelity. Yet, the game does a good job of not making this an issue, as you’d hardly ever pay attention to it while playing. 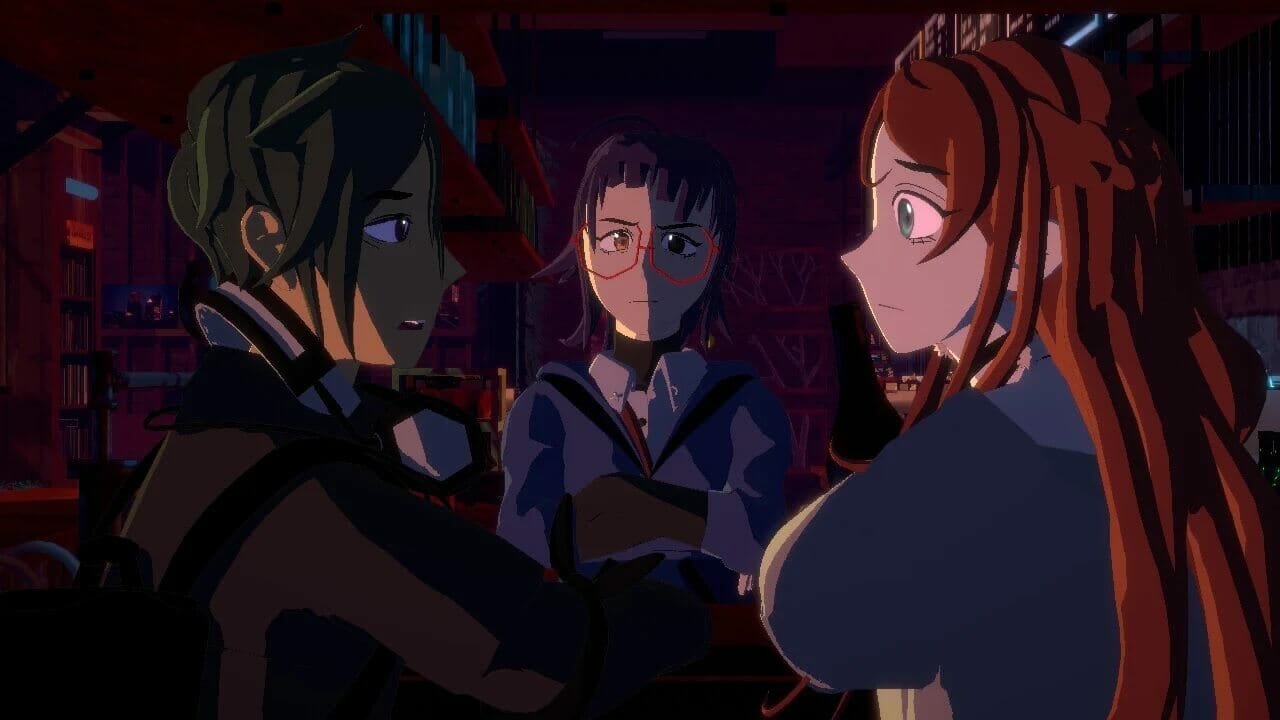 Necrobarista isn’t voiced, and while this may be an issue for many, it more than makes up for it with its unique aesthetic and artstyle. Since the dialogue is the main focus of the game and text being the only way of representing said dialogue, the developers did an excellent job of making sure the text matches the pacing and style by having it flow visibly around parts of the screen reminiscent of the anime Monogatari (if you know, you know)

The only issue I could find with the structure of the text is that sometimes it doesn’t match well with the background forcing you have to squint to see some parts of it. While this might be a nitpick, it’s an issue worthy of pointing out regardless.

Yet another beautiful part of the game is its excellent music. While there aren’t many songs (which makes sense as the game isn’t long), they’re all beautifully composed and back up each scene well, especially the melancholic and impactful moments of the game. Kevin Penkin, who notably composed Tower of God’s brilliant soundtrack, has done an excellent job yet again. I’d sayt he game is worthy of the purchase for the superb soundtrack alone. 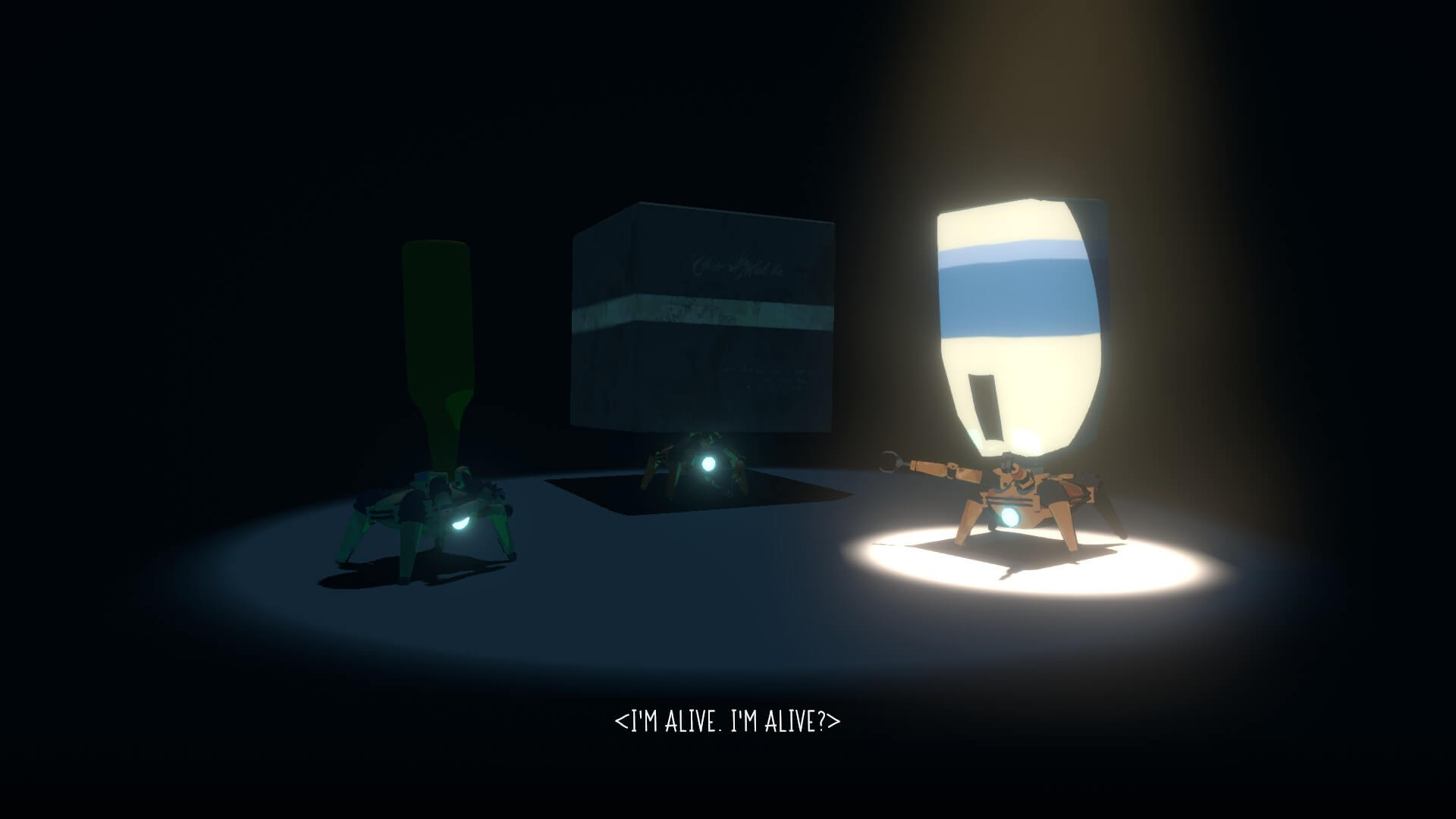 Necrobarista is a generally short game that’s structured into many small chapters with brief intermissions between them. These interludes usually comprise of three robots built by Ashley discussing events that happened in the chapter. The conversations between these sentient robots are always quirky and entertaining.

After the intermission, you will be prompted to choose a set of relating words appearing on the screen, which in turn, allows you to unlock some side stories in the game when exploring The Terminal between chapters. These stories are entirely in text form, and other than being well written and entertaining, they also help fill in some blanks where the story fails to explain. Sadly, not all stories can be unlocked. At least not in one playthrough, and it can be hard to determine which words you’ll need to unlock a specific story. 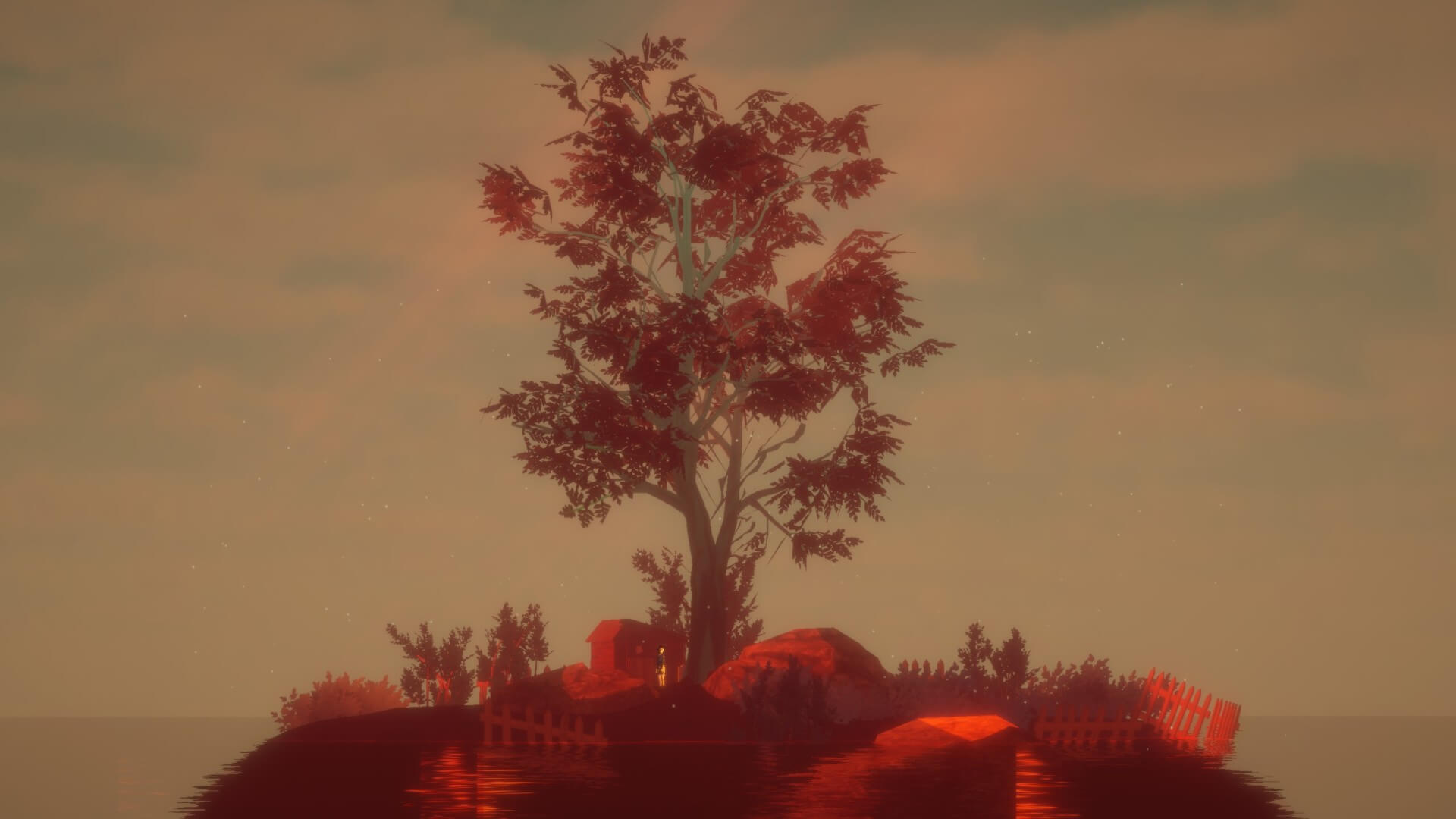 While I can’t discuss the story much without going into spoiler territory, what I can say is that Necrobarista is a beautifully crafted game about coming to terms with mortality. It’s a game that ranges from humorous and highly entertaining to profound and downright thought-provoking, and I cannot recommend it enough.

Do you enjoy visual novels? What do you think of my Necrobarista review? Let us know your thoughts in the comments section below.

Necrobarista is a beautifully crafted game about coming to terms with mortality. It's a game that ranges from humorous and highly entertaining to profound and downright thought-provoking.