Ninja Of The Year

From Software shinobi strikes again with its latest installment of demanding yet exhilarating gameplay. This time though, its nothing like the others you’ve seen before. From the story elements themes the feudal setting and lush environmental and character design, Sekiro: Shadows Die Twice is one of the best titles I’ve played in a long time. 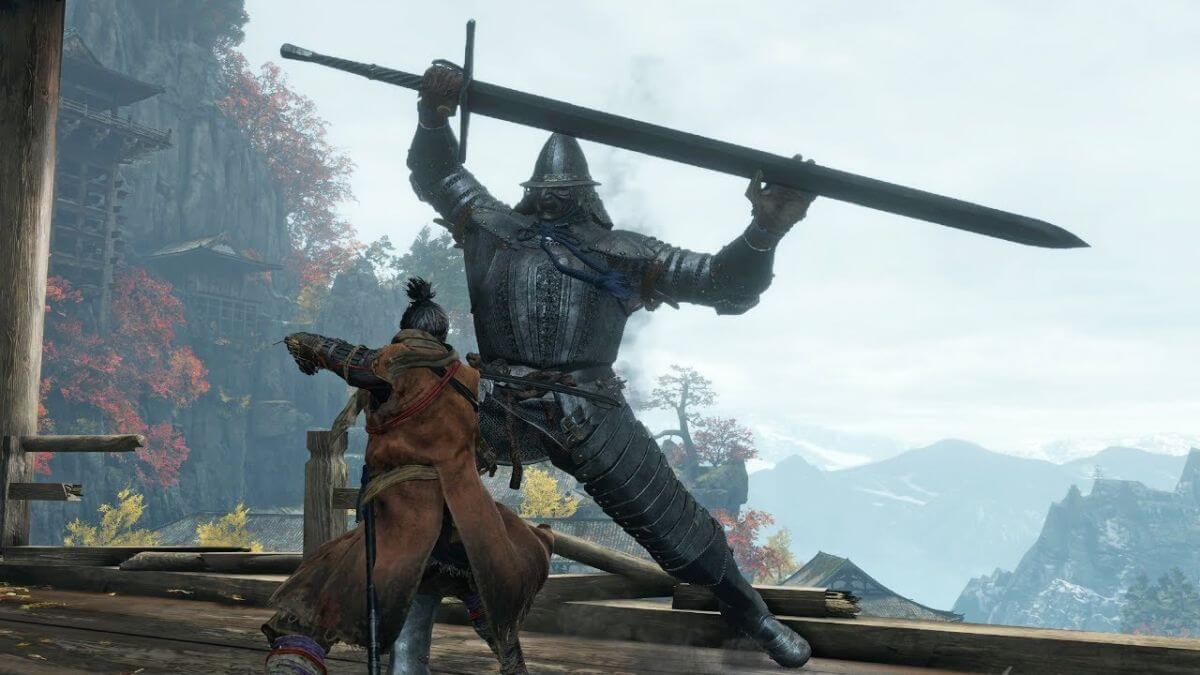 Much like all other similar titles in From Software’s library, Sekiro features identical elements such as resting at a spirit shrine and teleporting (similar to bonfires in Dark Souls). The loss of progress when you die, although this time you lose only half of your Sen (the currency) as well as half your XP ( more on that later.) You can also upgrade Sekiro but in a vastly different way than the other titles.

Asides from these elements mentioned as well as it being the staple difficulty From Software provides, it’s quite a different game overall and enough to stand on its own. 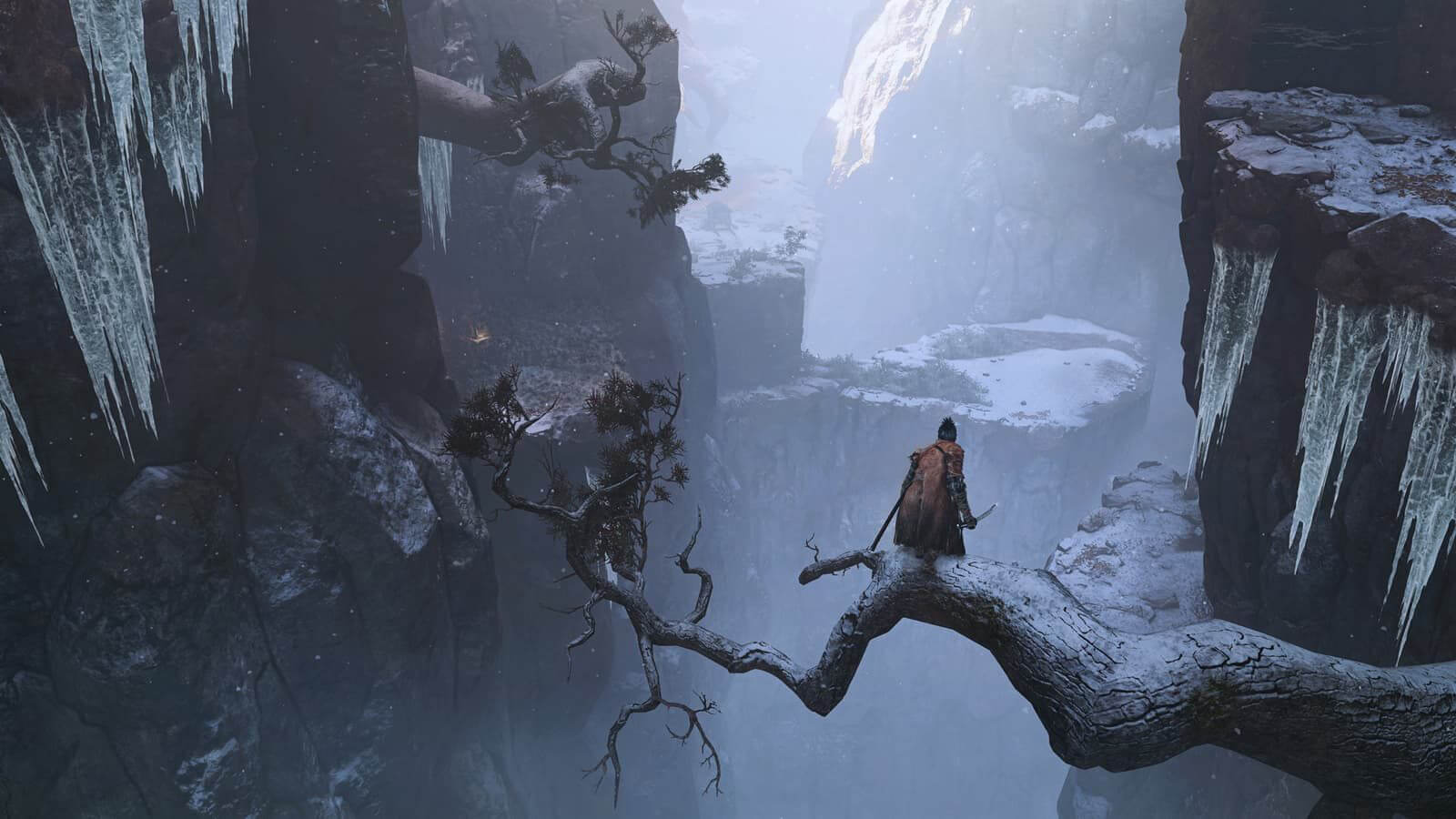 Story-wise, Sekiro is a brand new experience for From Software fans. The story is set in feudal Japan, around the Sengoku era. You are The Wolf; a bodyguard to the divine heir with your sole purpose being to protect him from those who seek him for his royal blood (without spoiling much).

The characters are wonderfully voiced and believable in both Japanese and English. Its central themes are well written for the era it’s based on. The graphics and art style are impeccable, the sound design and score genuinely make you feel like you are in feudal Japan.

Similar to the other FromSoftware games, Sekiro has multiple endings. You can choose different branching points in the story to determine what kind of ending you want. Each ending you get is determined by the choices you make, which in turn determines some of the bosses you’ll fight.

Though I might be comparing these titles, they are not the same game by any means. There are many new things for Soul’s fans to learn the first and most notable being the combat. Gone are the days of the R1 spam, you no longer can use shields, or have a variety of accessible weapons at any time. 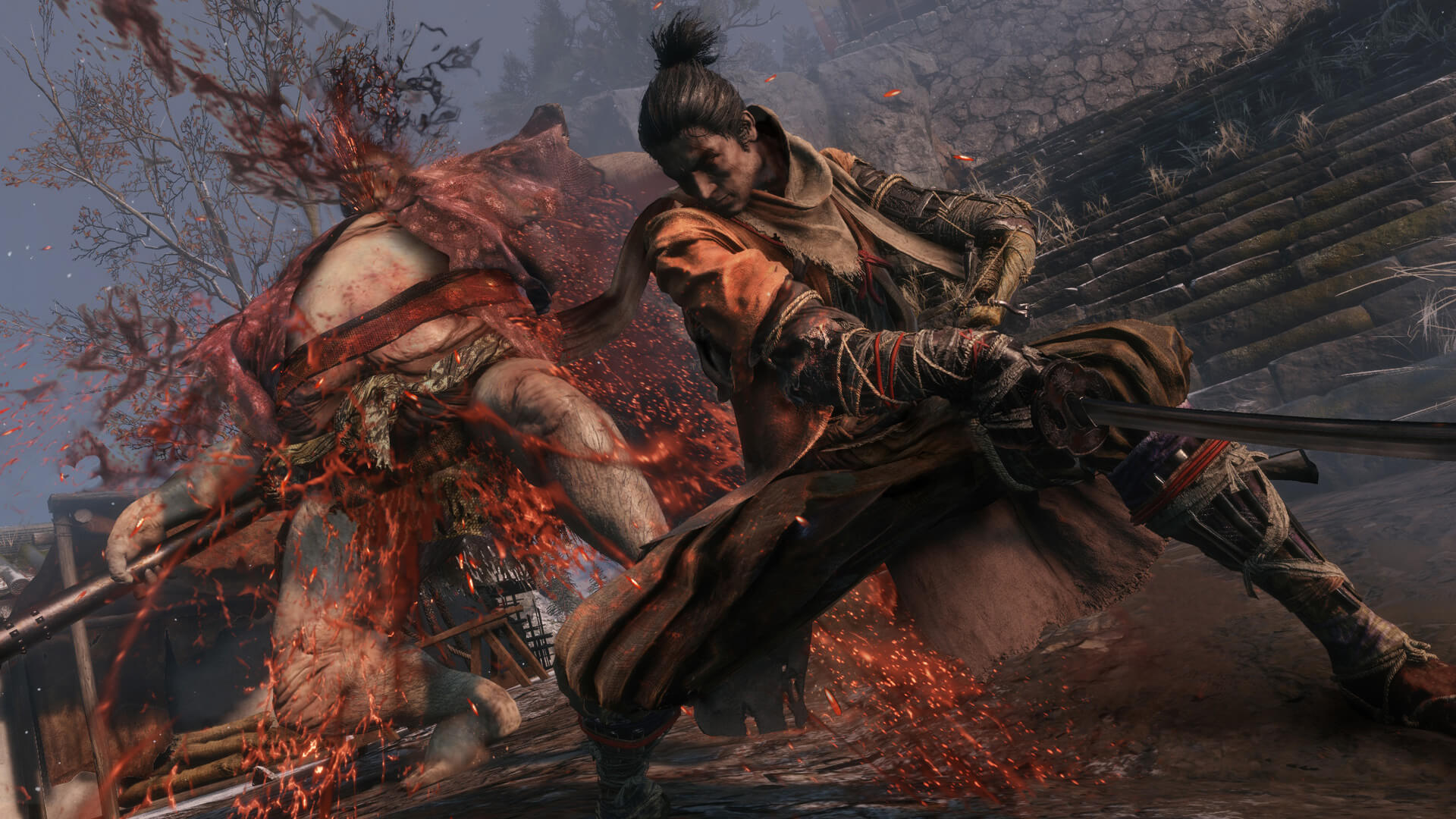 The main things players will need to learn are the deflect and counter mechanics, whereby to succeed in most fights, you’ll have to learn to strike at the right time and parry at the right time as well. You can no longer customize your character whatsoever and no online components, either.

One of the biggest differences is the inclusion of a linear story mode, something none of FromSoftware’s last titles had. It’s quite clear from software aims to broaden their horizons.

Then we have the resurrection mechanic, the big star of the game. This mechanic is meant to make things fair to players as well as serve a significant role in the story and lore. What I like about it is how quickly you can get up as soon as you are killed the first time. It can be used strategically as well. For example, when an enemy moves away from your body, you can quickly revive, and stealth-attack them as they leave.

You’ll also notice there is no stamina bar. You can attack as much as you want, but at the risk of your posture bar; its replacement, being broken. Attack too much without thinking and getting deflected off frequently will break this bar really quickly. The same goes for enemies and bosses. Once you deflect their attacks masterfully they become less of a hassle to deal with. Once the bar is finally broken, you’ll be able to land a one-hit critical attack called the shinobi execution. 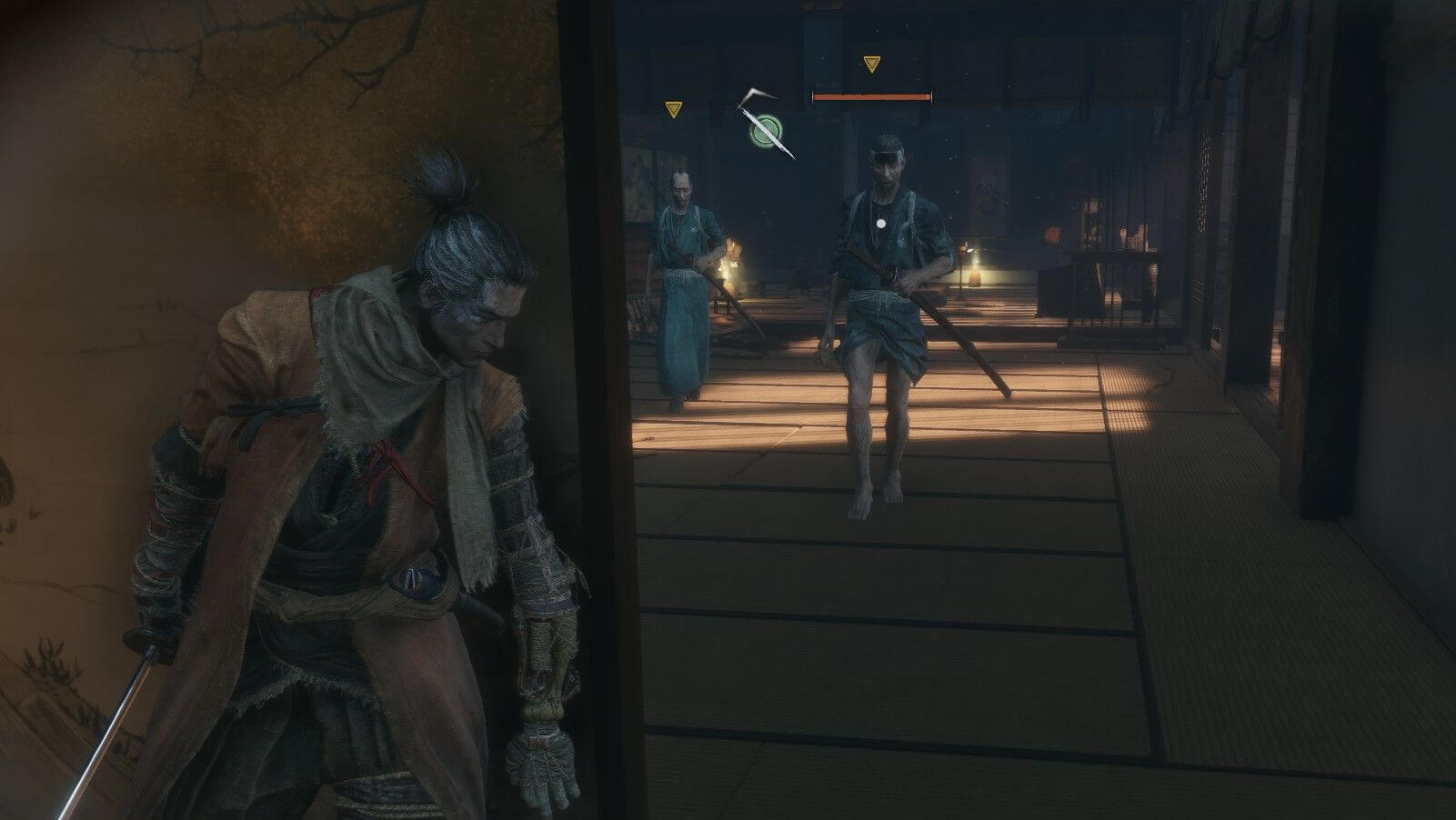 There are many ways to down your opponents, one which is the inclusion of the Shinobi Prosthetic Arm. This is a tool that can be customized and equipped with different prosthetic tools, such as the Grappling Hook; Shiruken for long-range attacks; Loaded ax for mainly breaking shields; Mist Raven for maneuvering enemies; and more. These tools exist to give you a variety of ways to get the upper hand of an enemy or boss, and even acts as a weakness to some bosses.

Asides the tools, you can also upgrade your skill tree with XP points, as mentioned earlier. You mainly earn XP points by killing enemies; you can then upgrade multiple skill trees, some of which can be added as you progress. These all have different shinobi moves, including higher grade moves. Though I found these new elements a bit jarring at first, I found it refreshing not to have to deal with classes, weapon damage, what the optimal armor is, and such. 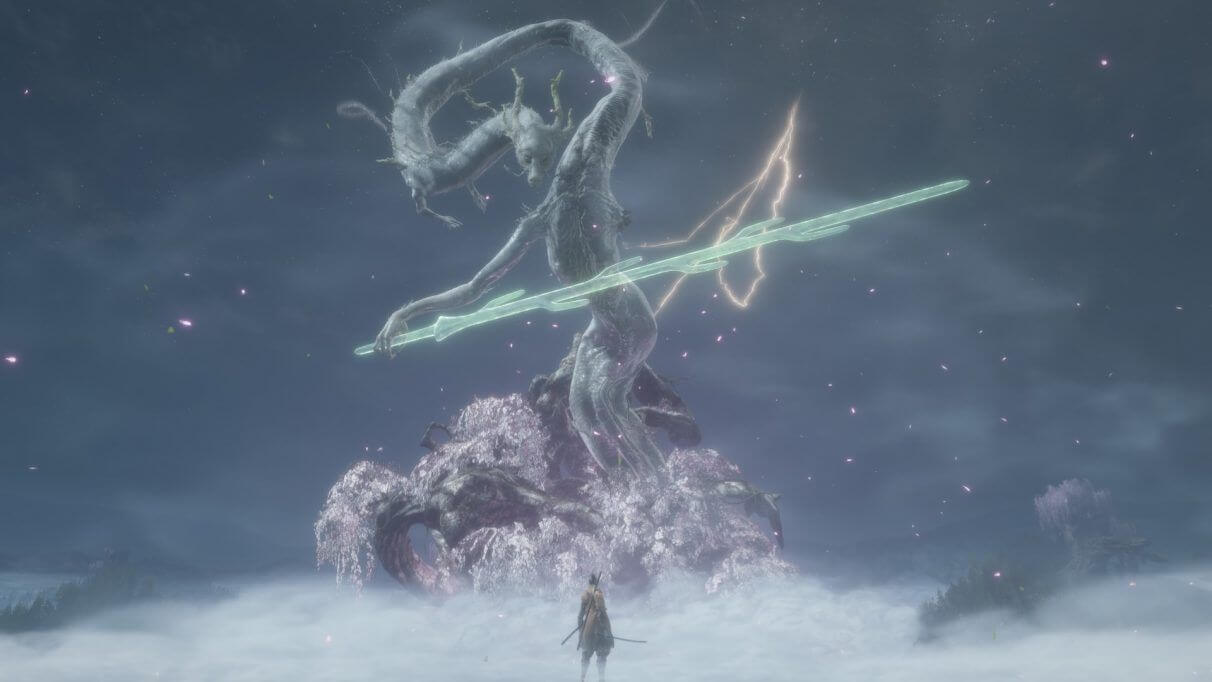 Then there’s the bosses. Much like other From Software games; they are the main draw. The bosses are well balanced, engaging, and fun while simultaneously being tough enough to beat you into the dirt. The bosses are genuinely the best part of the game.

Each boss has its own patterns, tells, and weaknesses. Many of the bosses are tough enough to one-shot you at any moment if you are unprepared, even with your resurrection ability, it might not be enough.

Your hesitation and miscalculation will only lead to death. But once you get adequately prepared, learn the boss’s patterns, masterfully deflect attacks, and use your shinobi tools expertly, you’ll see yourself becoming the true Ninja God you are. Hours of frustration turns to elation, and you crave more. That’s the dynamic From Software brings to its games and provides its players with.

Die too many times, though, and NPCs you meet start to get the inflicted with the Dragon Rot; an in-game sickness, and their questlines won’t progress until you restore their state. Once you get thoroughly acquainted with the game and how it works however, this becomes less of an issue.

Apart from main bosses, the game is filled with various unique mini bosses with a variety of different enemy types. The farther you progress, the more enemy types you encounter. 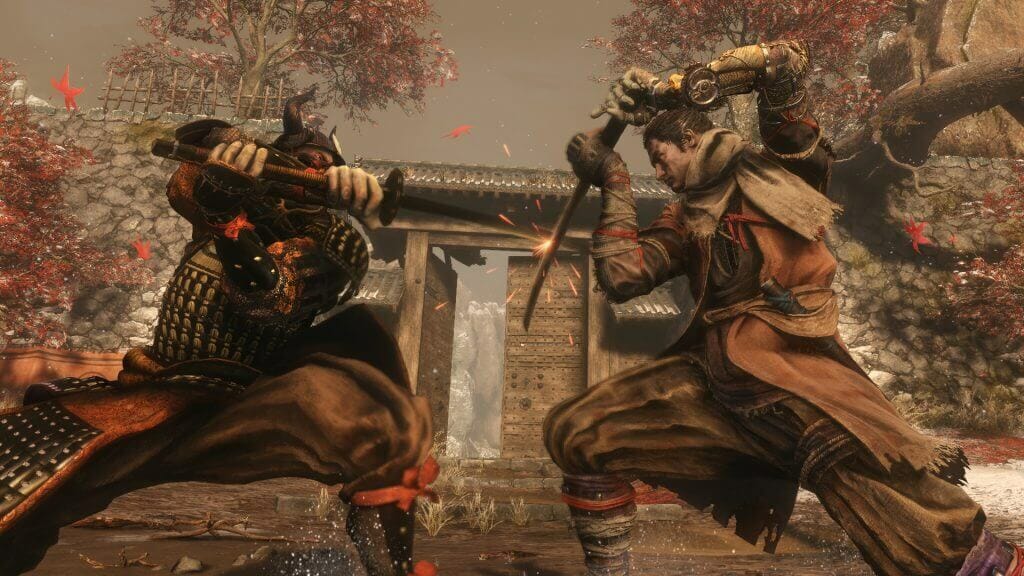 As a Souls’ fan, Sekiro is quite a refreshing experience. It’s wonderfully compelling story, and beautifully designed gameplay makes it a stellar entry into FromSoftware’s catalog, and worthy of being 2019’s Game Of The Year.

Have you played and beaten Sekiro? What do you like most about it? Let us know your thoughts in the comments section below.

Sekiro is quite a refreshing experience. It's wonderfully compelling story, and beautifully designed gameplay make it a stellar entry into From Software's catalog, and worthy of being 2019's Game Of The Year.