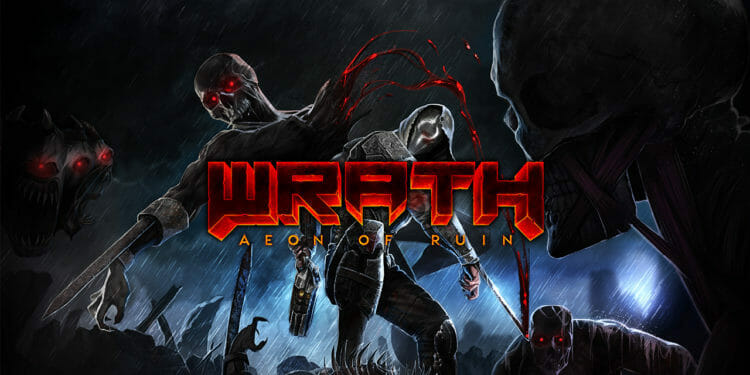 Wrath, or Wrath: Aeon of Ruin, is an upcoming FPS from 3D Realms. And one that immediately caught my eye when it was announced earlier this year.

When it comes to the retro FPS market, we’ve already started to see some really great stuff hit the market. Whether it’s the games from New Blood such as Dusk and Amid Evil, or 3D Realms’ great Build engine shooter Ion Fury which released this year, it would seem that now is a great time to be an old-school shooter fan. And no game confirms this more than Wrath: Aeon of Ruin.

The game is built entirely on the classic Quake 1 engine from id Software. Although it is using DarkPlaces, a modern source port of it, it still gives the game a certain aura of authenticity. In fact, in many ways I would say Wrath feels more like a sequel to Quake than the actual Quake 2.

After being teased earlier this year, an Early Access version was released on Steam on November 22nd. Since then I’ve been playing through this version and also the first patch which was released December 18th. So I feel I’ve got a few things to say about this. Although please note this is not a review, just my initial impressions of the Early Access version. We will be releasing a full review of the game once it’s finished. 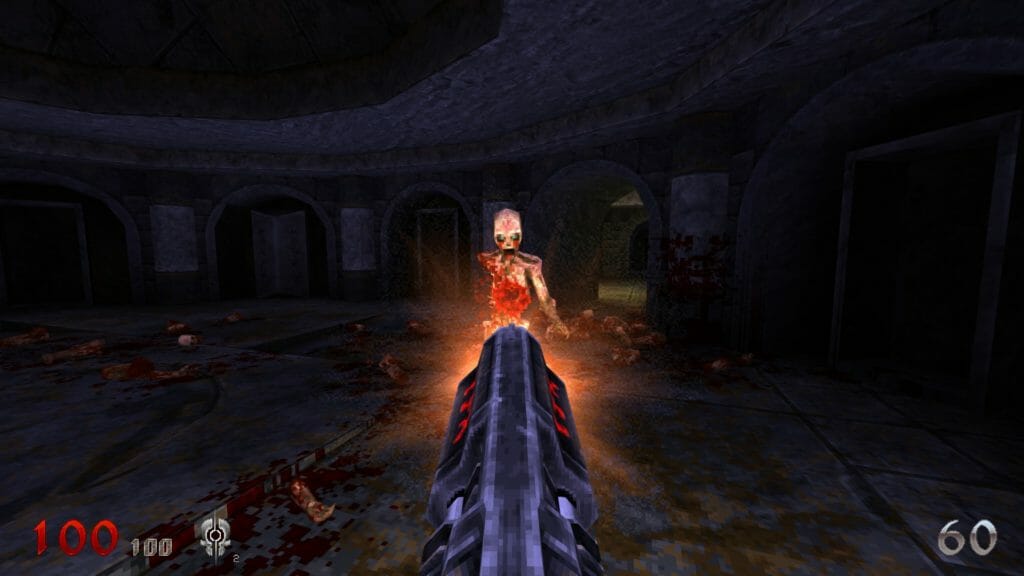 According to what lore is available, you play as the Outlander. You’re given the task of clearing out “the Guardians of the Old World” by “The Shepherd of Wayward Souls”. The game is rather light on story, but so were most shooters of the ’90s. Much like other retro shooters, it’s not a game you play for the story. The story is mostly there to create a backdrop for the action. 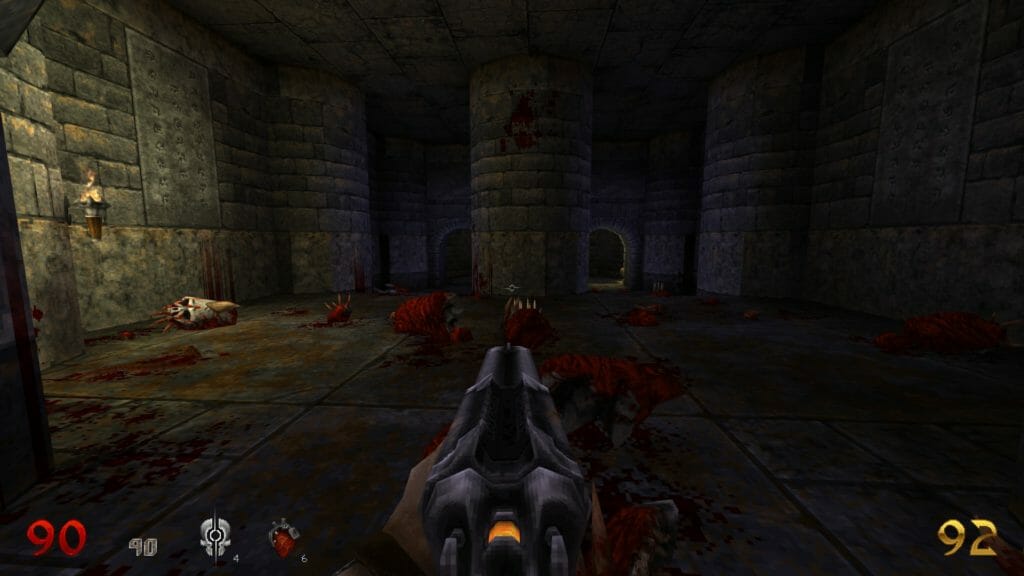 Wrath plays mostly like Quake, though with more than a few quirks of its own. The most unique feature is probably the weapon loadout, of which all have an alternate fire. The initial weapon is an arm-mounted blade that slashes at enemies when used normally. With the alt-fire, you can use it to charge through enemies. You can even charge through the air using it, helpful to reach certain platforms.

The Coachgun serves as the pistol. It deals pretty decent damage against weaker enemies. The alternative fire is a more powerful shot that can kill multiple zombies in a single shot. The shotgun is the third weapon. It serves as the close-up killer of the game. But it can also be a powerful mid-range weapon even. The alt-fire is a charging shot that when released sends pellets ricocheting against walls.

The next weapon in the arsenal is the Fang Spitter. It functions almost identically to the Nail Gun from Quake. Although the alt-fire is interesting in that it fires both barrels at the same time which increases accuracy somewhat. It is also the most metal weapon in the game, and the idea of firing teeth is something I find amusing and kinda disturbing at the same time.

The next and final weapon of the current version is the Retcher. The interesting thing is how it’s connected to the in-game world. Some enemies you fight, specifically some of the infected-looking enemies, have cysts growing on them. When killed, these cysts can be picked up and used as ammunition for the Retcher. So firing diseases on people is a thing in this game. Though the cysts more act as an acid attack to be honest. The Retcher’s primary fire is launching single cysts. However, the alt-fire can launch 3 of them at a time. As a setback, I noticed they do lesser individual damage this way. 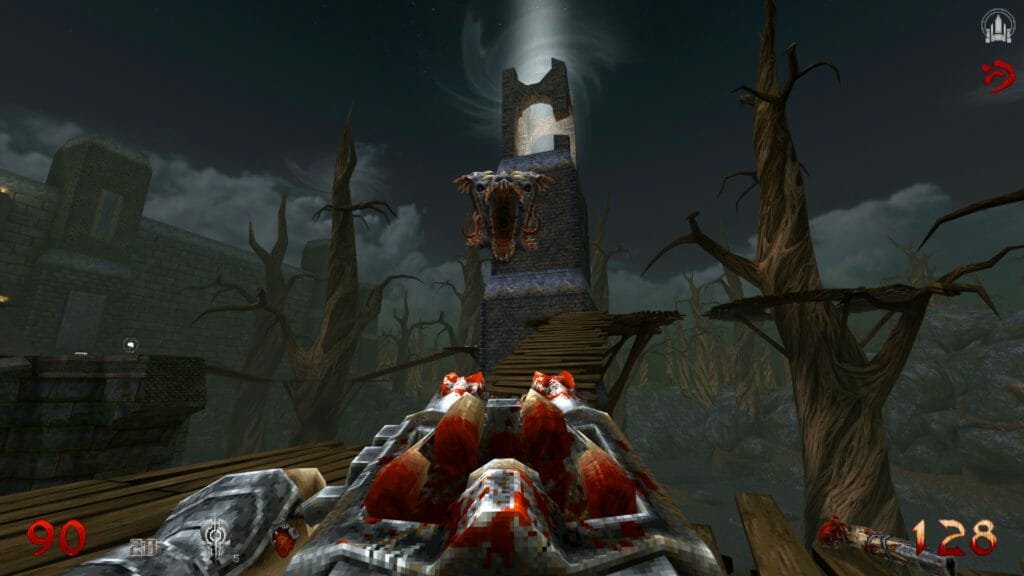 So far the enemies are pretty diverse. The Fallen serve as the basic zombie that is pretty much no threat unless you fall asleep or something. The Invaders are your basic grunts and can deal a bit of damage in numbers. Taking them out first should be a priority. You also have the Afflicted, who throw their own cysts at you. Doing so often creates an explosion of acid, so they’re good for taking out crowds of enemies.

The same goes for the large toad-like creature who similarly to the Afflicted will puke acid towards you. They can take a lot before going down but once they do, they can take a lot of enemies with them. You also have the Widow who is similar to the Fallen, but screams at you and comes at you with claws. They’re very nasty if you don’t deal with them with a shotgun blast.

There are also some flying enemies in the game. The Heretic is a three-headed creature that looks similar to the Cacodemon from Doom and functions similarly. It will shoot fireballs at you until it is close enough to go in for a bite attack. It can also take a few shots to kill. The Wraith is similar to the skrags from Quake, and are flying enemies that fire blue projectiles at you. They can take a lot less damage compared to the Heretic. 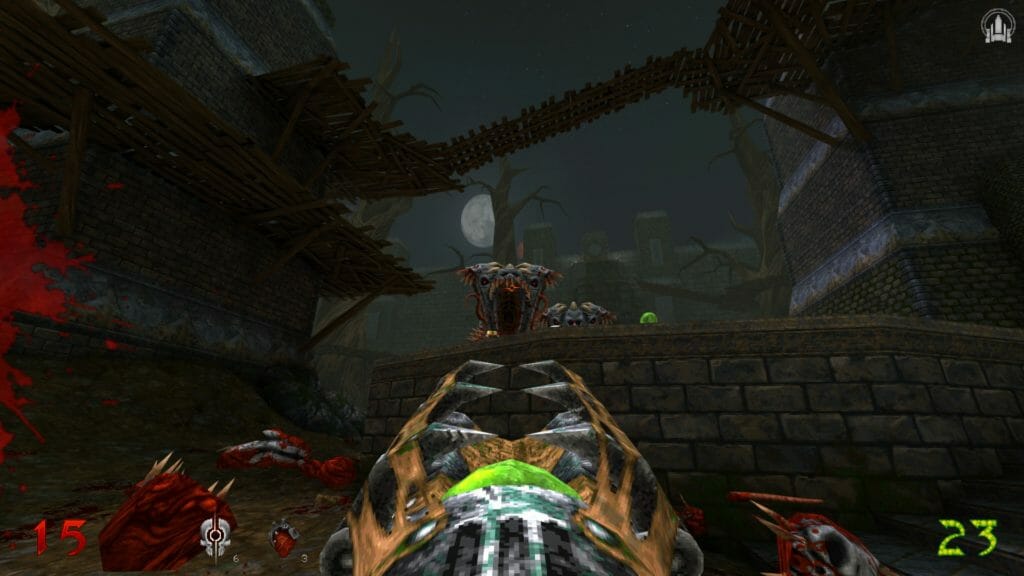 While the enemies and weapons both feel derivative of classic shooters from the ’90s, the mechanics is where Wraith sets itself apart. Unlike most FPS games, you don’t have any traditional save system. Saving is done using artifacts known as Soul Tethers. You can only carry a certain amount of these. So once they are used up, you can’t save.

That’s not to say Soul Tethers are your only means of saving the game. The game still autosaves now and then. And you can use Shrines scattered around the levels to save as well. Upon loading a game you can choose which you want to load from as well, essentially giving you 3 save slots.

Soul Tethers used to be part of your inventory. But after the recent patch, they are a separate item, assigned to F2 as a hotkey. The other items are used with their own hotkey. They can be accessed at any time using a mouse drag menu. 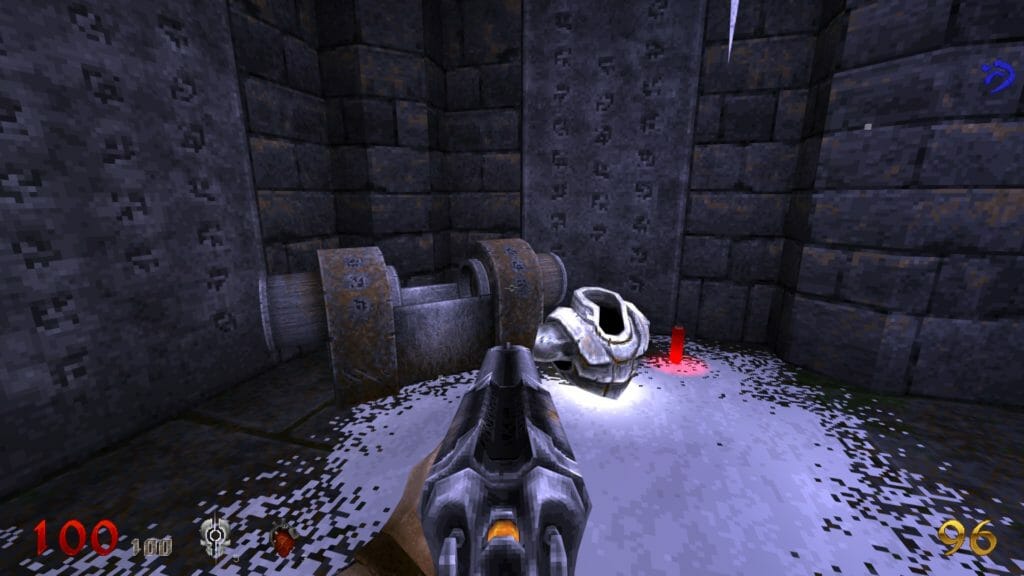 The Life Siphon allows you to draw health from slain enemies. It’s a good item to have if you’re running low on health. Though it also requires you to be quite offensive and not get hit. So it’s definitely an item that rewards skilled players.

Cruel Aegis is an artifact that trades some of your health for an impenetrable shield. You only have this shield for a certain amount of time before it runs out, however. It’s a very tactical item since it’s useless if you don’t have a way of healing after using it.

The Drowner’s Apparatus is an artifact that lets you breathe underwater for 20 seconds. It’s very useful if you plan on doing a lot of swimming. Unfortunately in what I played it was extremely rare and I think I only found one of them. 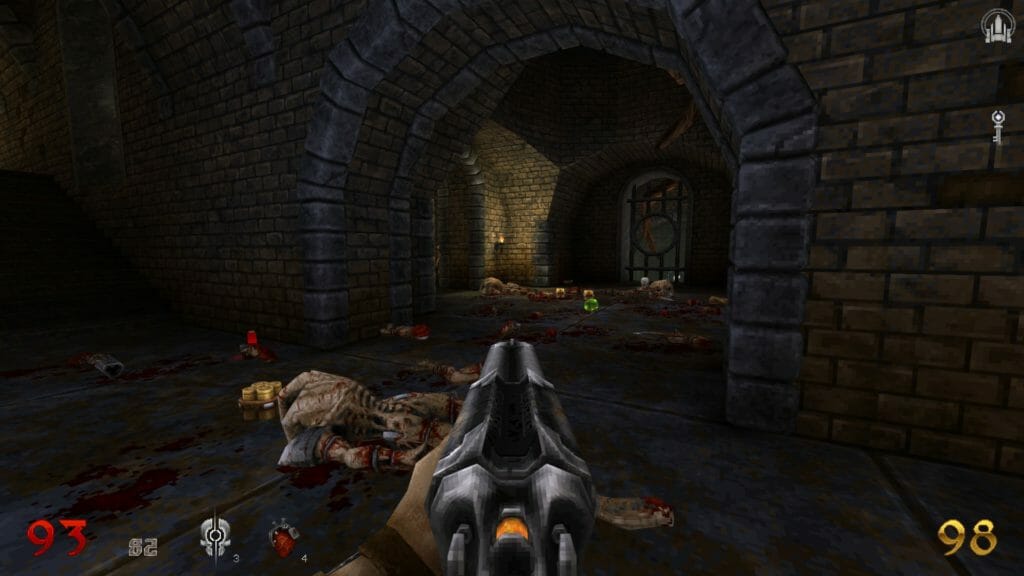 The current Early Access version of the game gives you access to two levels. The Undercrofts, which is a very Quake-y medieval-themed castle map. This is the one to start with and where you’ll get introduced to the game’s concepts and enemies gradually. I found it a very long but fun level to play with some great throwback level design.

The second level is The Mire. It’s a swamp themed level with some dungeons to go through and plenty of areas to explore around you. I found this one a little more interesting from a level design perspective. Considering there’s an entire level underneath what you initially discover. And since you eventually return to the surface, the level loops around in a cool way.

What we can glimpse of the level progression in this version is that the full game will have several levels that you can reach through a hub. It seems each level houses an end level artifact that you use to progress, by placing them in an altar in the hub. It feels similar to the original Quake although Wrath stands out more from the sheer scope of its levels. These might be some of the biggest levels I’ve seen in a Quake engine game.

I also felt the rate at which the game challenges you was consistent. Although I did find the game a tad bit on the easier side after the patch released. It seems the overall difficulty was scaled down and balanced a bit. I still died on Normal difficulty. But, I would probably recommend that veteran FPS players play on Hard to get an actual challenge. 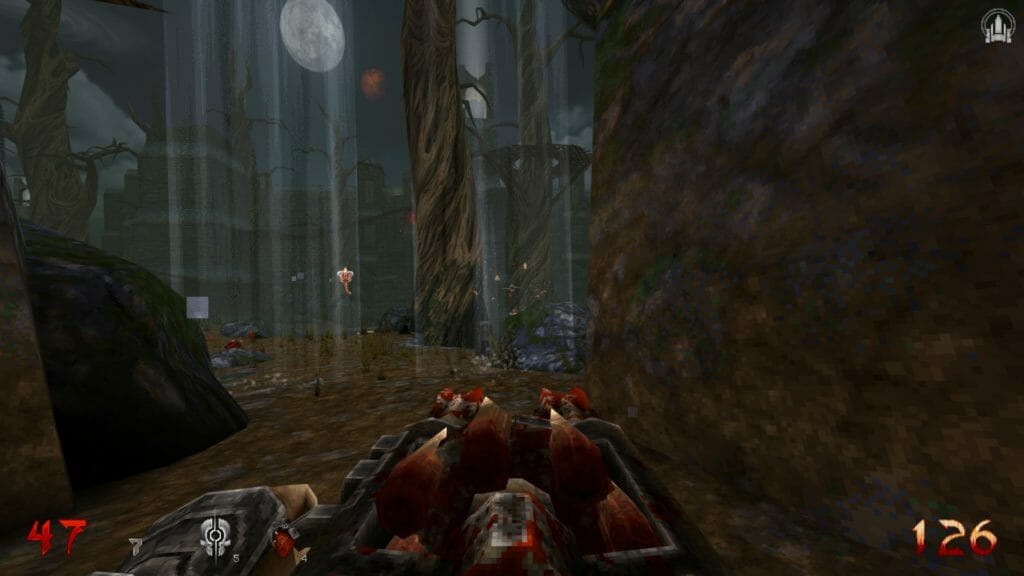 Since Wrath uses the original Quake engine, the game looks pretty authentically retro. There are even visual downgrade options to both make Wrath run better on older hardware, as well as make it look even more 90’s. Options like software palette, disabling animation interpolation and doubling pixels make the game feel even more authentic than it looks otherwise.

That being said, Wrath is definitely best enjoyed with all options cranked up as it lets you appreciate the texture work and modeling more. The look of Wrath feels derived from Quake but further expanded upon a lot more. What was a lot of hues of grey and brown in Quake has now become a much broader palette.

The sound is also another highlight of Wrath. Andrew Hulshult, who’s famous for his work on the aforementioned Dusk and Amid Evil, returns with a pretty great soundtrack here. It’s definitely more on the ambient side, which I don’t mind. It gives the game a certain atmosphere.

The weapons and enemies all sound really great too. I especially love the satisfying splash sound when killing afflicted enemies. The sound of the Fang Spitter is also satisfyingly metallic and grotesque. So props to the sound team on this one. 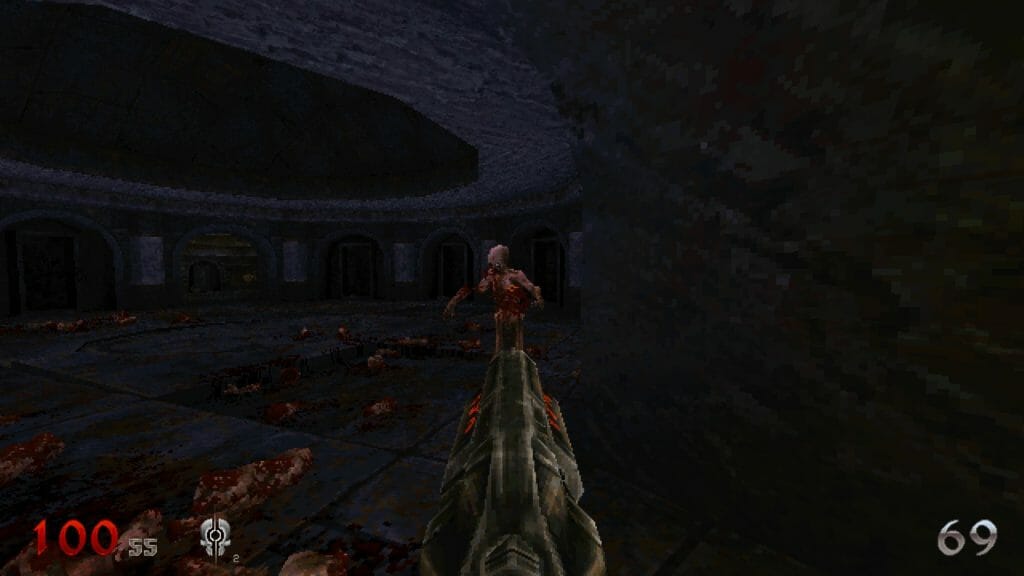 Wrath is definitely a game worth keeping an eye on if you’re into old school shooters. It’s a game that feels born from the ashes of the ’90s, carrying the legacy of games like Quake, Doom and Blood much like other throwback shooters that have come out recently.

While it kinda feels like a retail TC mod at times, it does stand on its own as its own game. And I highly recommend it to anyone who grew up with 90’s shooters or anyone who wants a taste of what 90’s shooters were all about. I personally can’t wait to play the full game when it comes out and I am excited to see what the upcoming updates bring to the game.

If you enjoyed my review, please also check out my recent review of WarpThrough. And make sure to follow us on Twitter to get notified on upcoming reviews! What do you think about this first impressions article? Does it entice you to get Wrath? What was your Wrath experience? Let us know your thoughts in the comments section.