Lead an order of brave knights to take revenge on your brother!

The looter shooter genre has gained a lot of popularity in recent years, with titles like Borderlands 3 and Destiny 2 taking over. Given the enormous success of this type of video game, Counterplay Games has created something different, combining the looting system with a gameplay focused only on close combat. From this idea, Godfall was born. Here is my Godfall review on PlayStation 5.

Godfall’s story begins with Orin, the protagonist and leader of an order of brave knights, who is betrayed and thrown off his tower by his brother Macros. Macros accumulates power to perform an ancient ritual capable of transforming him into a god. Fortunately, however, Orin survived the fall and will now try to foil the traitor’s plans with the help of the Sanctum, a kind of sentient magical construct.

From here on, Counterplay Games’ title will continue with a fairly linear structure that will see the protagonist cross different realms to eliminate all of Macros’ subordinates before fighting him directly. There are three areas in the game and in each you will need to collect elemental seals and then unlock the fight with a boss.

You get these seals as rewards for missions and consequently to accumulate them you will complete many of them in the same kingdom. However, these missions will all be very similar to each other. Typically, you’ll always enter an area, activating some artifacts, defeating hordes of enemies, and finally fighting a mid-boss.

You can continue exploring the map even after you have finished your primary mission, but unfortunately this aspect also leaves something to be desired. The secondary objectives are more than forgettable and the environmental puzzles that hide extra treasures are really uninspired and repetitive. 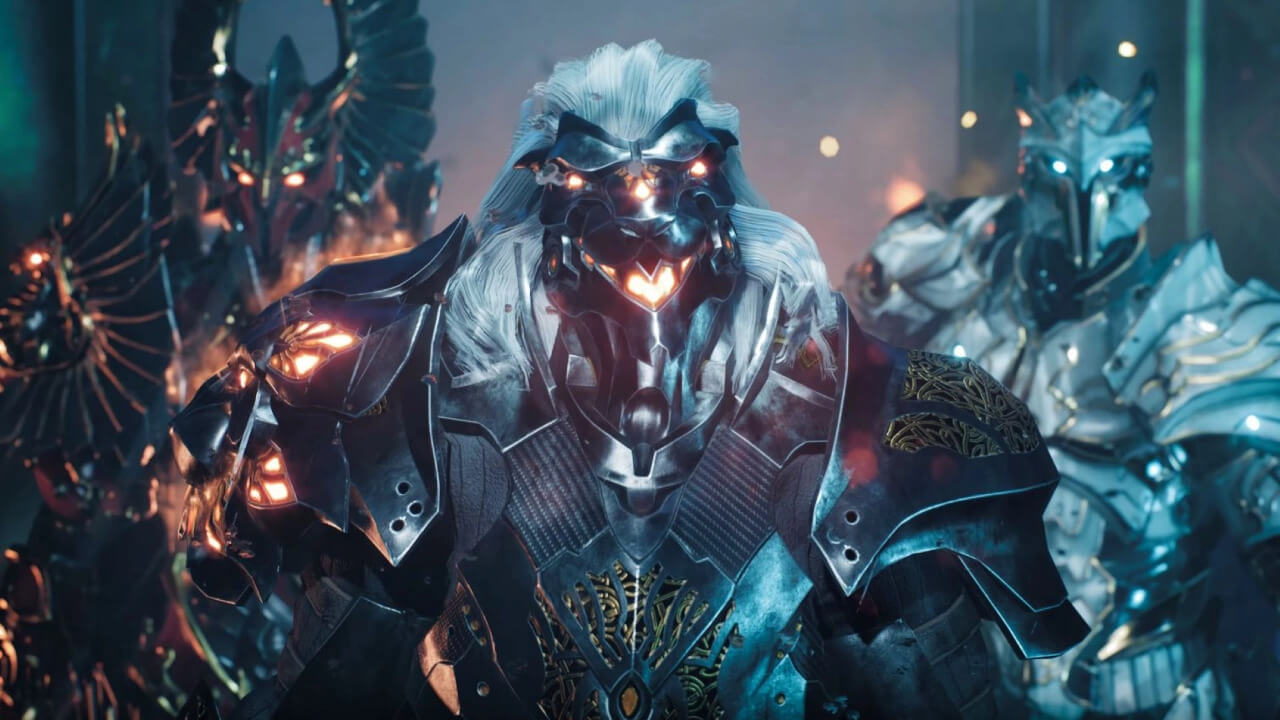 Godfall’s combat system is like that of a very classic action RPG. You can dodge, parry, deflect blows, use various unlockable skills by leveling up, and of course perform both light and heavy attacks. Light attacks mainly inflict damage to enemies’ HP but also apply an effect called Soulshatter, capable of accumulating damage that will be dealt to the target only after it is hit by a heavy attack.

In addition, many attacks will help fill the enemy breach gauge, a bar that once full will briefly stun the target, leaving them at the mercy of a powerful execution. Furthermore, the type of attacks and some skills vary according to the type of weapon you are using and in total 5 are available in the game: longswords, dual blades, polearms, warhammers, and greatswords.

Although on paper the combat system seems quite complex, in reality it is too shallow. The combos of all weapons will always have the same number and order of attacks. As a result, once you’ve decided on your main gear, you’ll run the same cycle of attacks over and over. In addition, many techniques and active skills are really not very useful in combat.

You will end up using almost only those related to weapons and the shield. Because of this lack of depth of the combat system, all fights are quite boring, including those with bosses. At least, since Counterplay Games designed the title to be played mainly online, facing it with a group of friends, you will not feel the weight of this extreme simplicity. 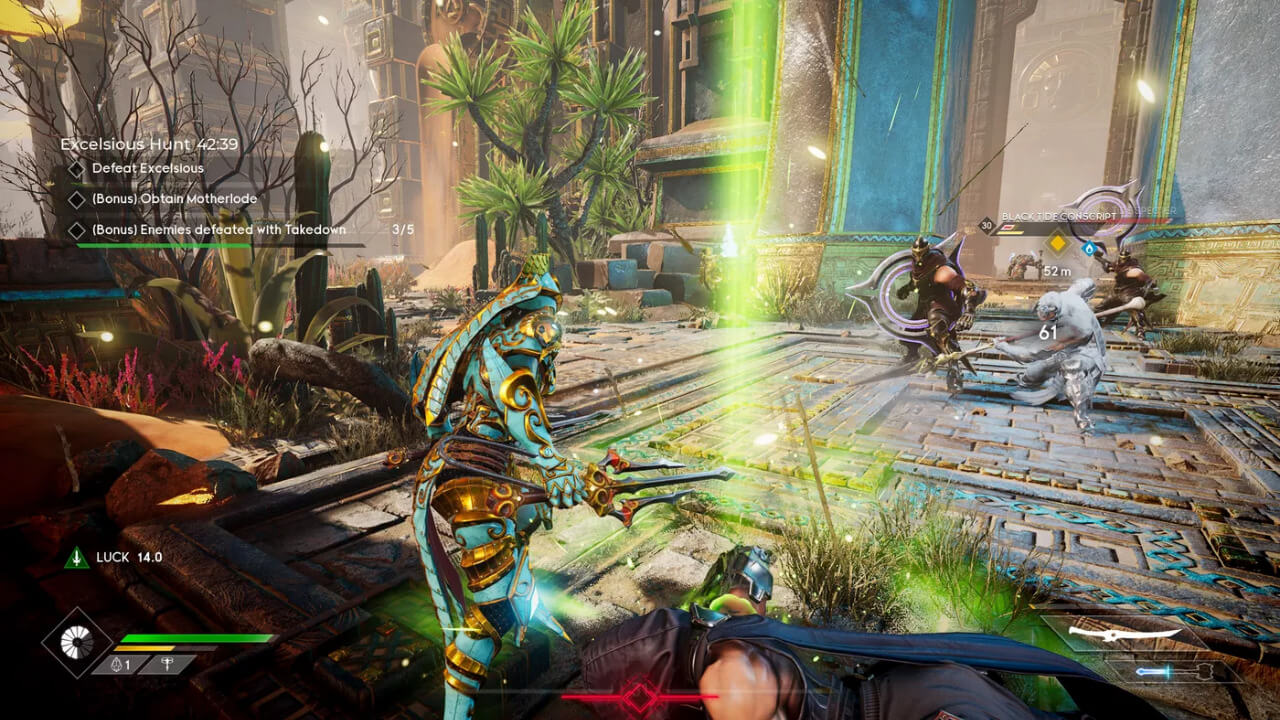 THE POWER OF ORIN

Orin possesses 3 key attributes: might, spirit, and vitality. Might affects weapon damage, spirit increases healing power and skill damage, while vitality defines the number of life points. Besides getting points to spend to unlock skills, every time you level up by defeating enemies or completing missions, your attributes will increase evenly.

However, this is not the primary method of upgrading your character, as the difference in battle will be made by the equipment. In Godfall, each amulet, ring, or talisman will increase the value of one of your attributes, allowing you to point Orin in the direction you prefer. Once you have decided how to upgrade your character’s attributes, you can make it even more efficient thanks to Valorplates.

Valorplates are 12 unique armors that can be unlocked using materials belonging to specific kingdoms and that will allow you to specialize Orin in using certain techniques. For example, some may offer you a passive bonus to poison or bleed damage, while others may increase your stamina or critical strike rate. In addition, Valorplates will also determine the effect of the Archon Fury, an ability that will allow you to power up your character for a few seconds.

The Valorplates will in turn influence your attributes thanks to the constellations. Counterplay Games created these slots in which to insert upgrades. This way you can improve all your attributes, but some armor may reward you to focus on certain characteristics by offering you greater bonuses. Choosing the armor that best suits your play style will be key to getting the best out of Orin.

Sometimes, however, you may be forced to change your character setup to complete some more advanced missions. In this situation, the Valorplates will come to your aid since, as far as equipment is concerned, each of them will behave as if it were a character in its own right. As a result, you can have equipment presets already assigned to each armor and switch between them as needed. 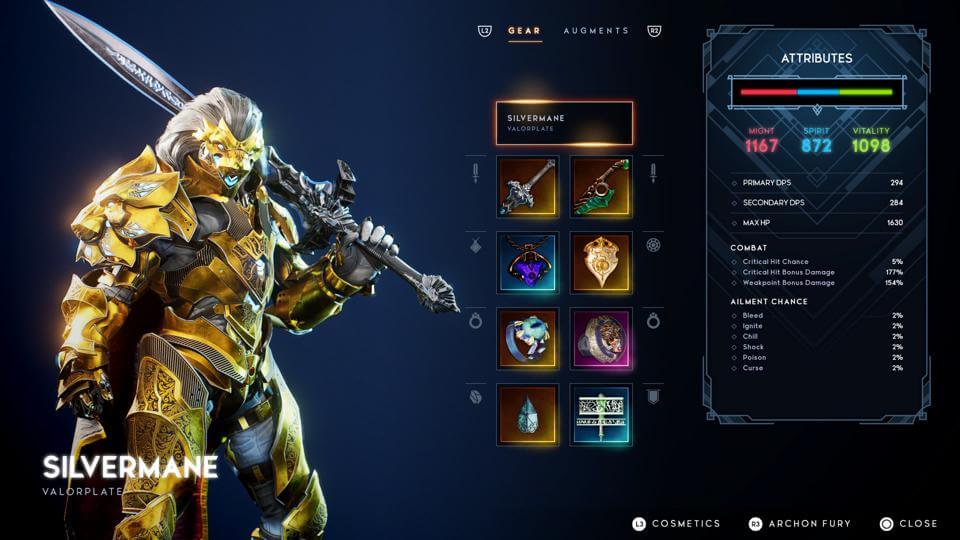 As with many other looter games, Godfall’s gear is divided into 5 rarities: common, uncommon, rare, epic, and legendary. A blacksmith can upgrade all game items up to five times to improve their effectiveness, but if you want, you can also increase their rarity with enchantments. In this way it is possible to greatly increase the power of non-legendary equipment and get extra bonuses, such as greater resistance to some elements.

Unfortunately, Godfall’s loot suffers from one major problem, namely the lack of variety. Since your character’s appearance is primarily determined by Valorplates, the only equipment you will actually be able to see will be weapons. The weapons present in Counterplay Games’ title, however, are few, they are very similar, and they do not offer particular advantages besides the parametric bonuses.

Consequently, after a few hours of playing the loot will already begin to seem very anonymous and over time, you may even end up not paying attention to it anymore. As for the end game content, after the defeat of the last boss, you will unlock the dream realm. In this realm there will be enhanced versions of the bosses you have already faced during the primary campaign.

These new opponents will not only be stronger, but will also have a series of modifiers capable of really increasing some elemental damage or specific resistances. Before you can face one of these bosses, however, you will first have to overcome some missions randomly chosen from the ones you have already completed.

Each time you complete one you will discover some modifiers of the boss and now and then you may also receive a temporary boost. These missions aren’t bad, especially if you’re playing with someone, but they rely on aspects of the game that don’t work. Loot is truly anonymous, and the combat isn’t particularly fun, so it’s hard for a group of players to bother with these challenges. 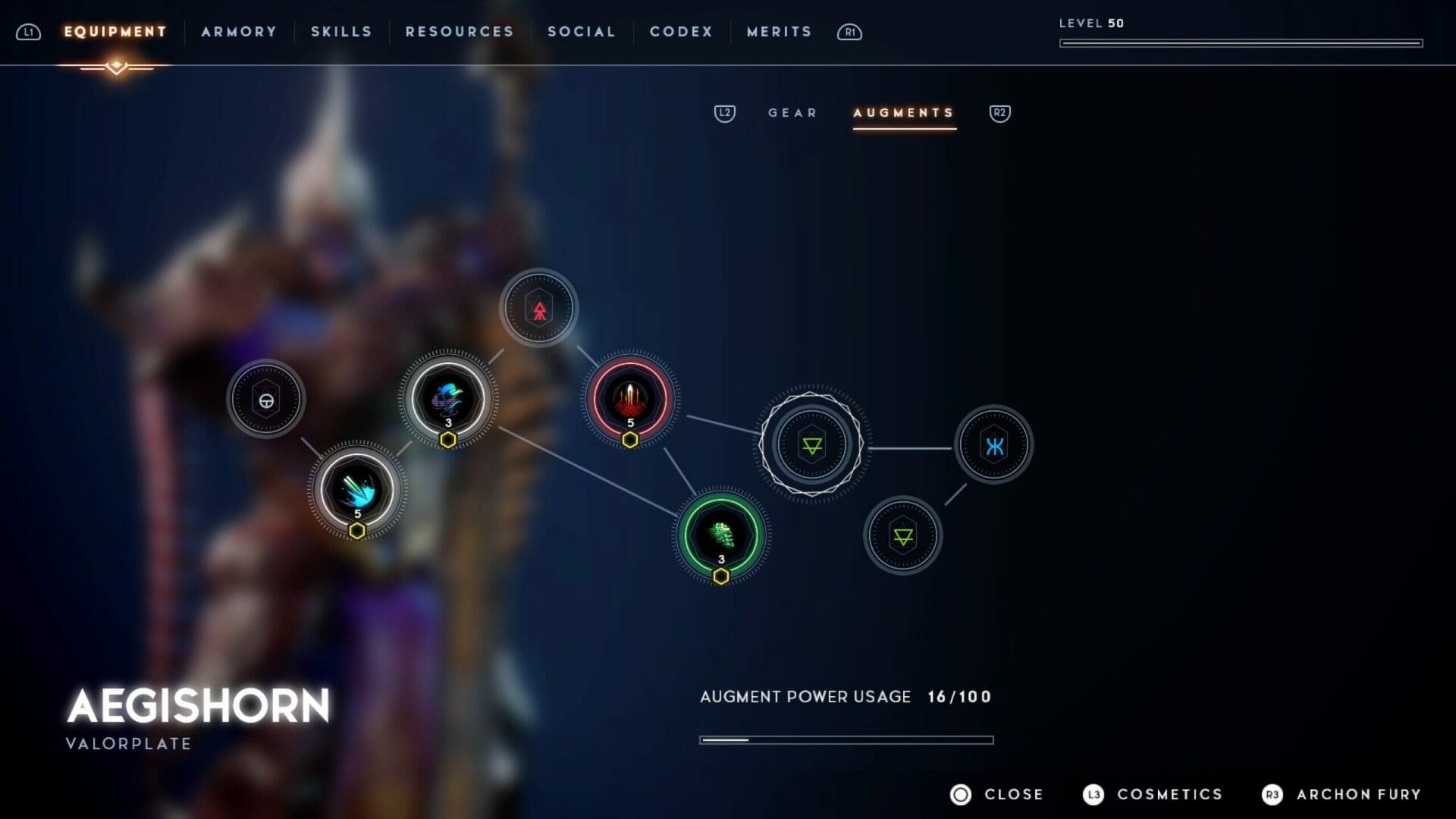 As for the technical sector, Counterplay Games has done a good job with the PlayStation 5 version of the game. Like many other next-gen titles, Godfall also offers a graphics mode, which allows you to play at 30 FPS with the highest possible quality. There is also a performance mode, which instead will allow you to play at a fixed 60 FPS with a small graphics compromise.

With both settings, the title is visually exquisite, therefore I suggest you focus on performance to have the best experience. The only problems that I would like to report are related to the audio sector and animations. The quality of the audio during the gameplay sections is often very disappointing, and they do not use the 3D audio features at all during the game. As for the animations, on the other hand, there is often a lack of weight in the actions performed by Orin. 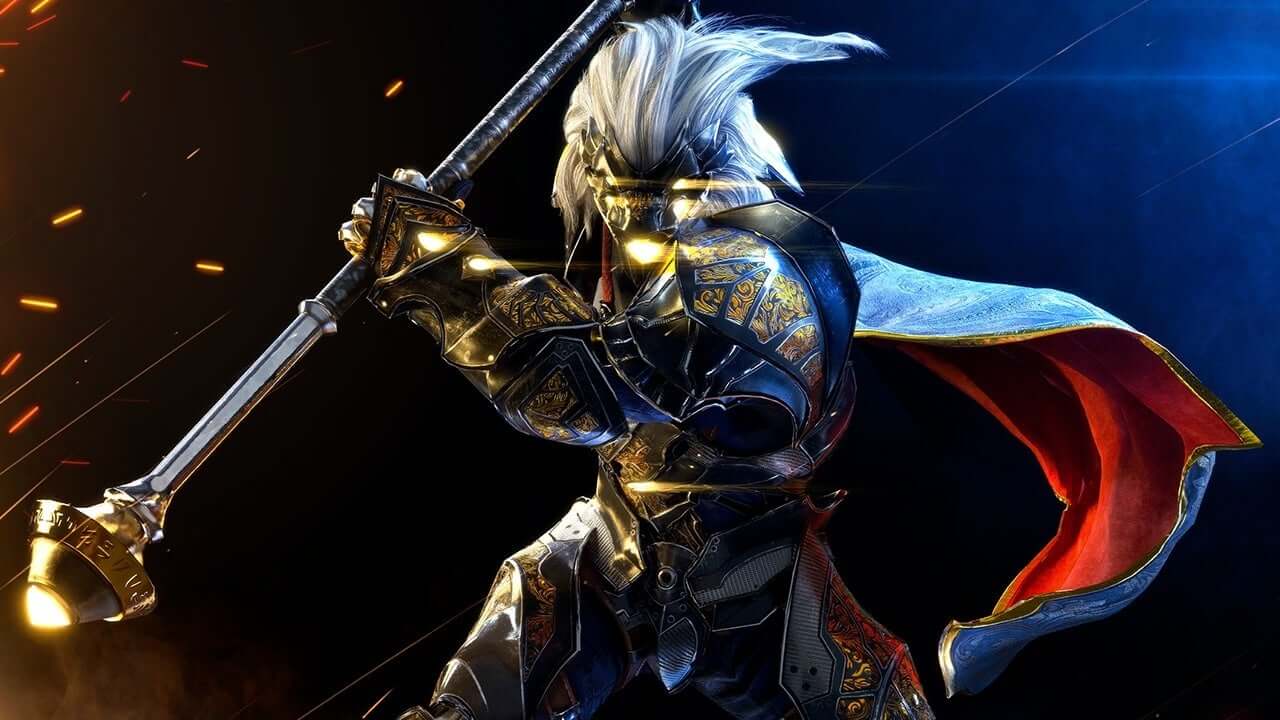 Do you want to try Counterplay Games’ Godfall? What do you think of my Godfall review on PlayStation 5? Please leave your thoughts in the comments below. Are you interested in more games? Check out our reviews for Fallout 76 Steel Dawn, Empire of Sin, Football Manager 2021, NBA 2K21 PS5, Hyrule Warriors: Age of Calamity, and Yakuza: Like a Dragon.

The combat system is shallow and the fights are very boring, both during normal missions and boss fights. All the loot is really very anonymous and as a result you may often not feel the satisfaction of getting it. Playing co-op with friends is sure to be fun, but if you're going to face it alone then Godfall won't leave you much.

What Is the Best Online Casino to Play for Real Money?