WIT Studio’s brand new original crime TV anime, Great Pretender, has recently been announced to premiere on Netflix on June 2 in Japan. This announcement is bundled with an all-new trailer showcasing the unique cast of characters as well as a new key visual. 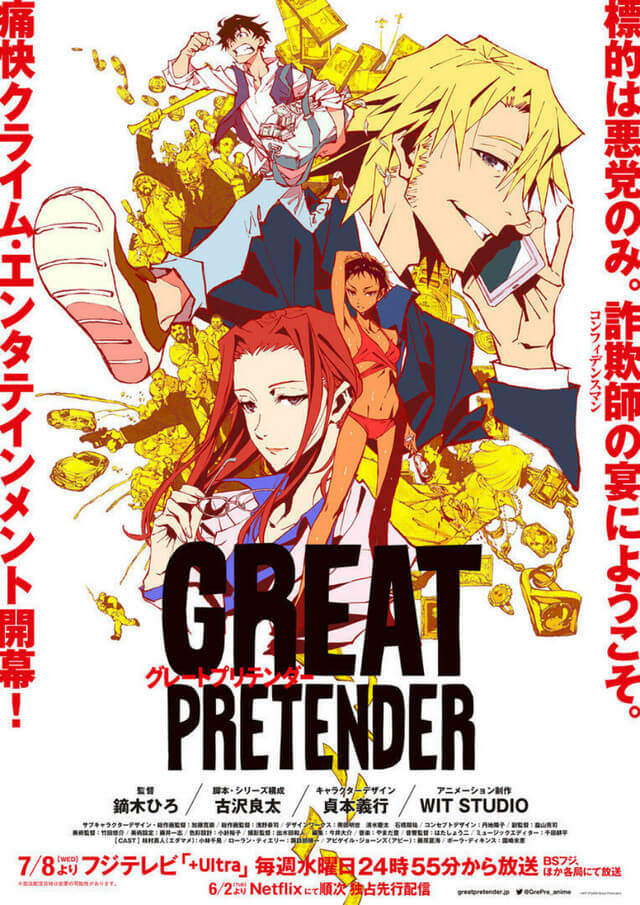 If this is your first time learning about the anime, The Great Pretender official website has provided a synopsis below:

Makoto Edamura is supposedly Japan’s greatest swindler. Together with his partner Kudo, they try to trick a Frenchman in Asakusa but unexpectedly get tricked instead. The Frenchman, whom they tried to swindle, turns out to be Laurent Thierry- a much higher-level ‘confidence man,’ in control of the mafias. Edamura is yet to find out what fate awaits him, after having engaged in the Frenchman’s dirty jobs…! Hiro Kaburagi x Yoshiyuki Sadamoto x Ryota Kosawa x WIT STUDIO – A high-end animated entertainment created by the best team of the century –

Additionally, the official website for Great Pretender also announced the first set of two release schedules for the anime on Netflix. The episodes will release in batches with each batch releasing every week from June 2.

The release schedule can be seen below:

Though episode 15 to 23 has not been confirmed for release yet, the dates above are set for the Japanese release of the anime on Netflix. A worldwide release is to be confirmed at a later date.

Great Pretender is being directed by Hiro Kaburagi of 91 Days, with character designs for the anime by the legendary character designer Yoshiyuki Sadamoto of Evangelion.

Great Pretender will be available to stream on Netflix once it releases.

Have you seen the latest trailer for Great Pretender? If so, what did you think? Let us know your thoughts in the comments section below.