A particularly short but equally intense title where you will shed some tears!

Lost Words: Beyond the Page DEALS

Mourning and loss are concepts inherent in the same human being. From an early age, many of us have had to deal with the pain of losing someone dear to us. A spiral of despair and suffering that, only over time, will become acceptance. We never truly overcome the death of someone dear to us, we simply learn to live with absence. In the gaming medium, the most touching and chronologically closest experience that comes to mind is Gris by Nomada Studio. Recently, however, I came across a welcome surprise from Sketchbook Games. Here is my Lost Words: Beyond the Page review on Nintendo Switch.

Lost Words: Beyond the Page came out about a year ago as a timeline exclusive to Google Stadia. Take note that Modus Games also got the publishing rights for the title. This little pearl boasts, to the script, a signature rather known by those who hang out in the video game industry. The name Rhianna Pratchett is enough to tell you everything.

She is the daughter of the well known Terry Pratchett who wrote Discworld. Rhianna has put her hands in creating video game settings and scripts since the Prince of Persia in 2008, also passing through a much more famous BioShock Infinite. Lost Words: Beyond the Page, at the end of the temporality of the exclusive for Stadia, has also arrived on PC and consoles. 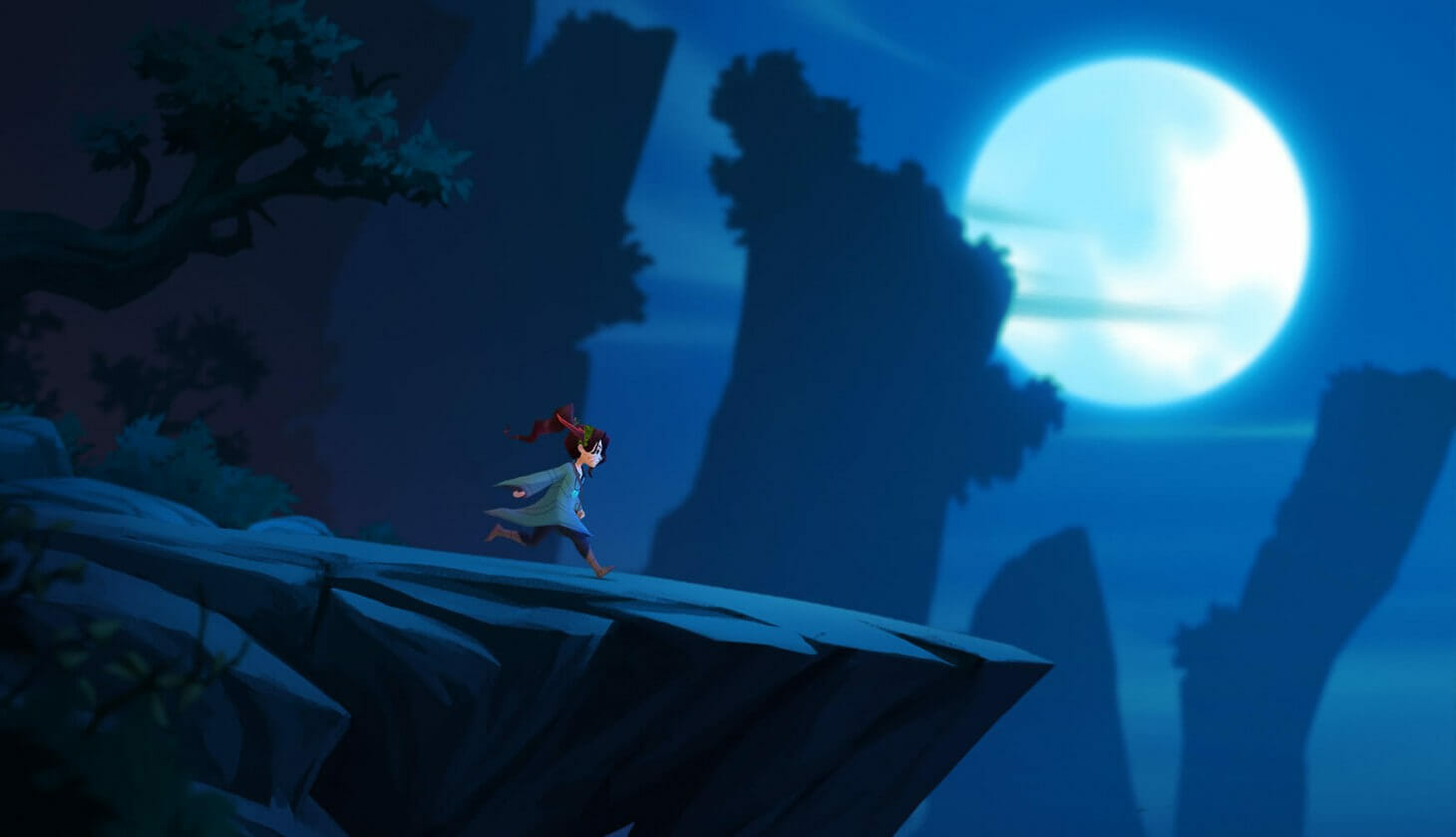 Izzy is a little girl who lives in a terribly normal family. Mom, dad, little brother, kitten, and very energetic and deeply interesting grandmother. A biologist, moreover, who has taught, over time, many curiosities to her little and intelligent granddaughter. Few of you have probably been lucky enough to experience a grandmother like Izzy did. She is like a second mother.

Izzy is a little girl who dreams of becoming a writer. And what better way to shape your skills than by writing a journal? Izzy’s grandmother obviously knows very well, and so takes advantage of the child’s creativity by giving her a small diary. And so, Izzy, the creative little girl, creates a story. In this exact moment, both the narration and the gameplay of Sketchbook Games’ Lost Words: Beyond the Page take two completely different paths.

On the one hand, we have the life of Izzy, which proceeds in its monotonous normality. On the other, we have that of an adventurer who you can customize by name, appearance, and general characters. Take note that it’s not really important to actually create a specific alter ego for Izzy. You just need to immerse yourself in the narrative of a child of that age. Clarice is the name I chose for the world adventurer, and that’s what I am going to use for this review.

Clarice is a young adventurer, as I said, who lives in a small village in the magical kingdom of Estoria. The village elder, Ava, protector of the community, is now tired and ready to retire. She will obviously pass the baton to the young girl. The joy doesn’t last long as a terrible dragon will fiercely strike their heads, destroying everything in its path and kidnapping the fireflies. 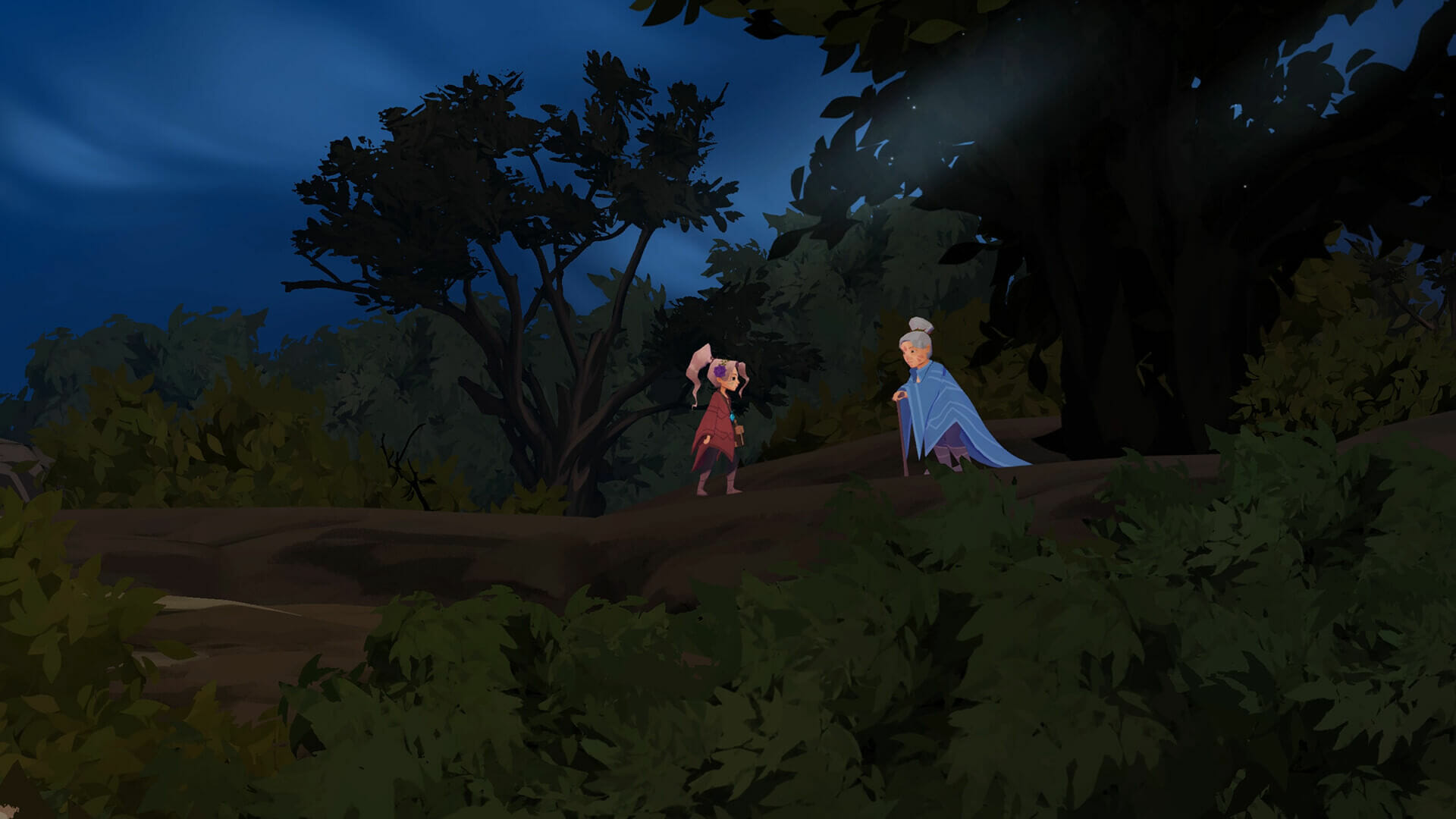 This dramatic turn in the narrative is obviously because of a sudden disturbance in the soul of the young Izzy. A sudden illness, in fact, will separate her from her beloved grandmother. The little one will try to be as strong as possible, both for herself and for her mother. However, a whirlwind of despair will envelop her and lead her to live the darkest period of her entire existence.

Clarice and Izzy then begin a tiresome journey of awareness and acceptance. The narration and gameplay in Sketchbook Games’ Lost Words: Beyond the Page, then continue on two very distinct tracks. On the one hand, you will face a 2D platformer with some really simple enigma to deal with. On the other hand, the two girls will live completely unique experiences.

In the real world, Izzy will continue to write in her diary. Not only the events of Estoria’s world, but also anecdotes, memories, and feelings that her grandmother’s sudden illness brings to mind. Along the way, there will be many blue lights that will reveal some marginal notes. This is very useful for knowing the thoughts and feelings of Izzy herself.

Take note that you can actually use the words written by Izzy. You can drag them with your pointer, recall memories through photographs, or solve simple puzzles by recomposing the sentences that grandmother used to pronounce. You will also be able to prepare tea, tidy up the little girl’s room, or other minor tasks. Nothing is ever very complex in Sketchbook Games’ Lost Words: Beyond the Page. This is only useful for laying the necessary emotional foundations.

However, the style with which they proposed these mechanics makes them extremely impactful and full of meaning. The phases that instead see Clarice involved in the world of Estoria was not that appealing. As you may have gathered, the pretext of Izzy’s diary is elegant, simple, and effective. The setting for Clarice is mundane and obvious. Although it is a story told by a small girl, I would have liked to see something more evocative and detailed. However, this was not the case.

I really appreciated the gameplay part in the world of Estoria. The young Clarice will have to interact with the world around her. She does this through the power of the words that are contained in the book that the wise Ava has given her. With the command “lift”, you can raise platforms. With “break”, you can destroy the rocks that block your way. Take note that the total words are relatively few. 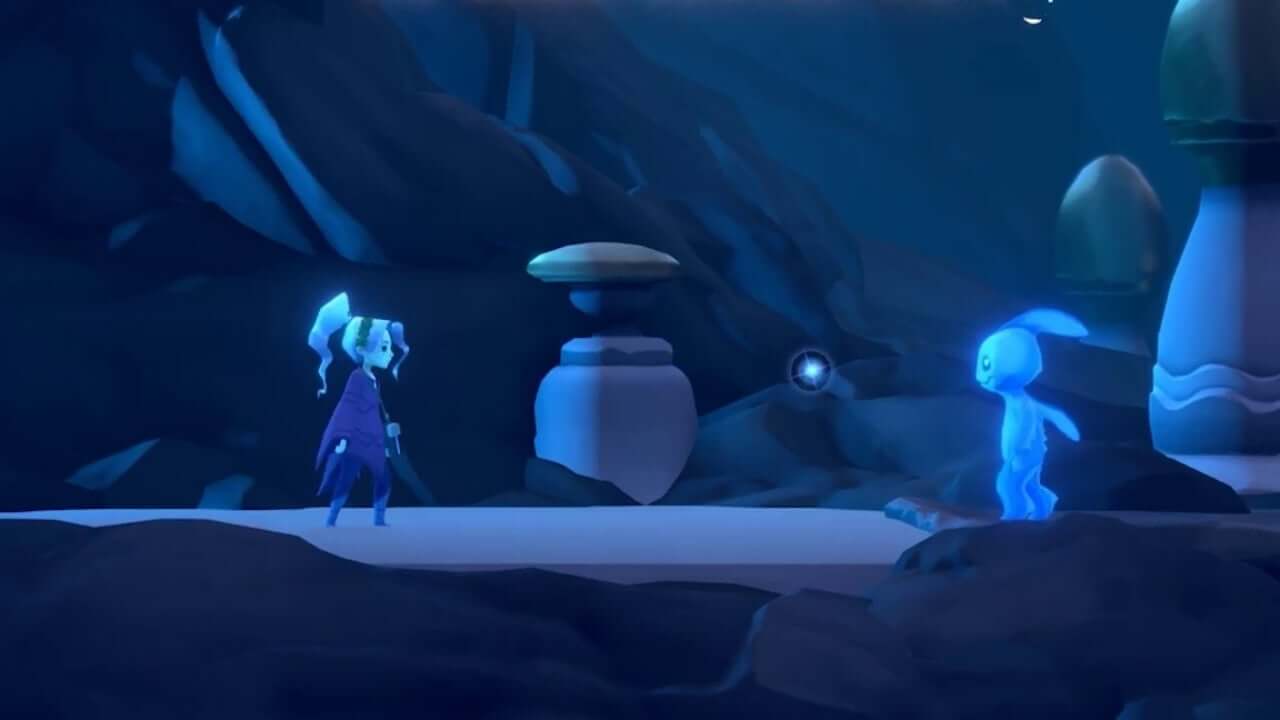 In the adventure’s course, you will notice an underlying repetitiveness. Given the poor longevity of the title, this is quite sad. However, it never becomes something annoying and the focus on narration and emotion never gives way to boredom. If I have to be honest, this is a title that fails to materialize. It’s too short, too simple, and does not offer a satisfactory degree of replay value.

You won’t find yourself saying, “come on, I’ll try this level again”. Once you have completed the title and Izzy has reached acceptance, you will not find particular ideas to take the controller back in hand. In other words, the game is great when playing it once, but not to go back and play again. As I mentioned before, my Lost Words: Beyond the Page review took place on the Nintendo Switch.

I have no particular technical issues to report, other than a few sporadic slight frame rate fluctuations and a wacky graphic glitch. This glitch blocks Clarice’s crouch walk animation, while still keeping the model moving. Absolutely nothing that goes to break the emotionality of the narration. Sketchbook Games wisely assisted this with a soundtrack that is certainly not epochal, but which knows which strings to touch. 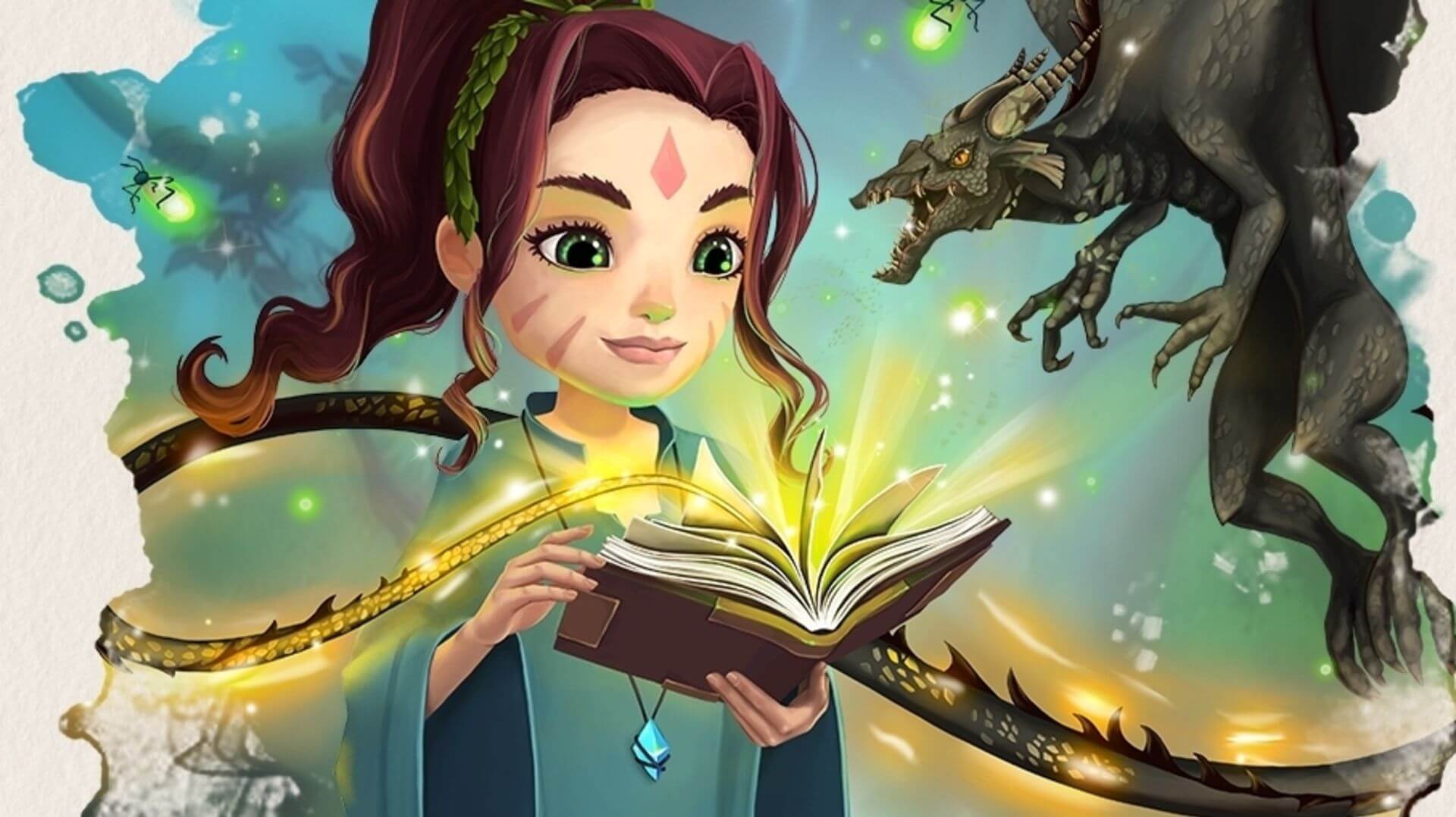 Lost Words: Beyond the Page

This small pearl of a small studio is a great clue of what can be done when you create a story with feelings, emotions, fears, and pains. It's just sad that the longevity is so short and it does not offer great ideas to continue living the adventures of Clarice and the growth of Izzy.

Lost Words: Beyond the Page DEALS