A hard and pure shoot-’em-up experience for the experts!

Project Starship X is a shoot-’em-up, which oscillates several times between the trappings of the genre and the deviations of the bullet-hell branch. In addition, there is a dose of extravagance in the game that never hurts to stand out from the crowd. Panda Indie Studio and eastasiasoft’s title is basically an interstellar journey between the frenzy of RECCA and the crazy atmospheres of WarioWare. Here is my Project Starship X review on Nintendo Switch.

As the tradition of the genre dictates, the plot is very bare. The four playable characters, of which only two are available at the start of the game, aren’t particularly different in their abilities. There is also not much to say in terms of the characters’ personal history. After a bizarre selection of languages, Project Starship X opens with a very important disclaimer: “Be careful, epilepsy risk”. The game, like almost every exponent of the genre, mostly lives on an arcade soul.

The good news is that the title, when it leads to bullet hell, adopts warning signs complete with triangles as a warning. This is very good, given the number of obstacles present simultaneously on the screen. However, the aforementioned flickers don’t exactly match idyllically with the game’s design. If you just can’t stand the flashing lights, you can stop reading right now! 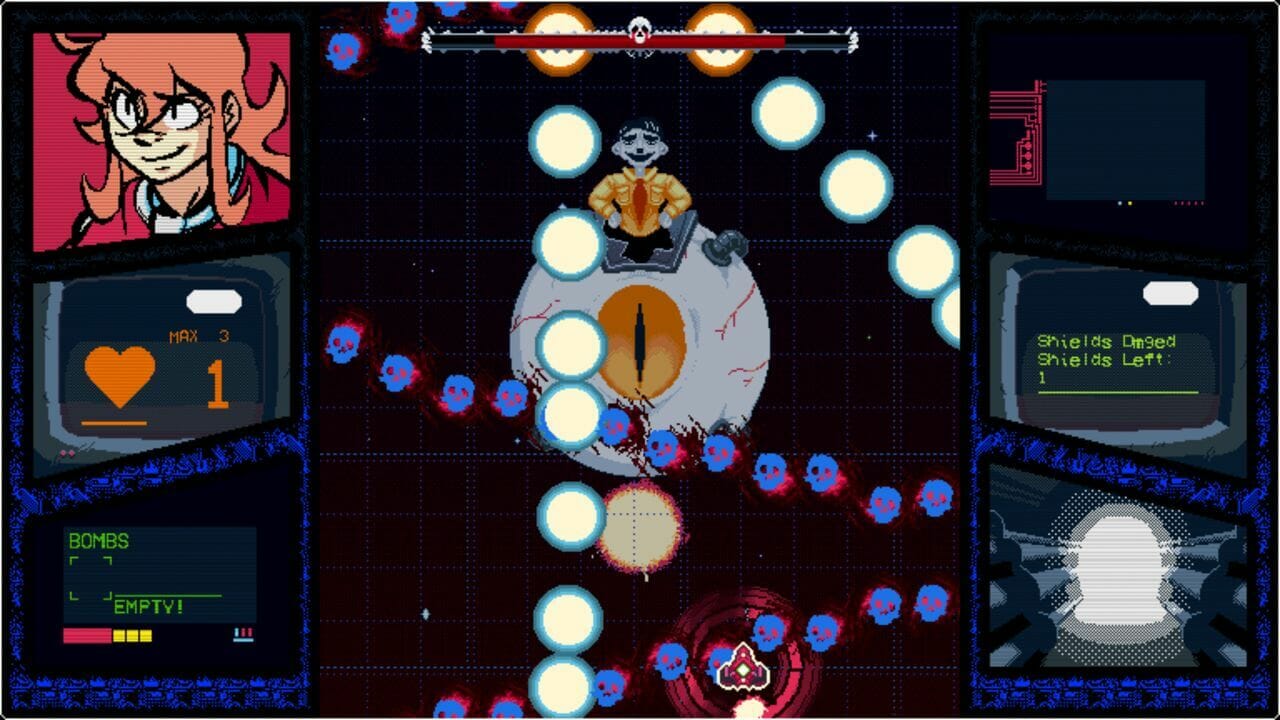 The minimalism of Panda Indie Studio’s Project Starship X extends into the game mechanics as well. Besides moving the shuttle, there are two actions that you can take. The first of them is, of course, fire. In pure bullet hell tradition, this allows you to hold down the appropriate button for a continuous flow of shots towards your enemies. The second is the forward momentum or something known as ‘dash’. Take note that the dash has no offensive power whatsoever.

However, it has various uses in the field itself. This comes very in handy, as you can use it to pass through enemy fire. Besides this, power-ups can only be collected with forward momentum. While playing the game, I discovered that there is no lack of space for strategy. This is a hard and pure shoot-’em-up experience. If nothing else, it is undoubtedly a title for the experts of the genre.

During the review phase, I ran into some roguelike elements that the Project Starship X trailer had vaguely alluded to. In short, between levels, there is a chance that you may stumble upon a shop where you can spend some coins on power-ups. Take note that the game hands out these coins very generously. However, Panda Indie Studio’s title is very unsuitable for newbies!

Therefore, it is important to get those power-ups. The momentum mechanics in the game are in fact subject to a cooldown. This is comparable to what I saw in the first Crash Bandicoot game. Take note that you must measure each use of the forward sprint carefully. The level design is nothing short of merciless with players who struggle to move forward in the game.

In addition, the shot is directional but never for purely lateral movements, nor for backing away. The game limits the maximum choice to diagonal movements. Therefore, it is necessary to plan the moves well in advance. Between the continuous flickering and the frenetic pace of level design, however, an inexperienced player won’t really have a single moment of breathing space. 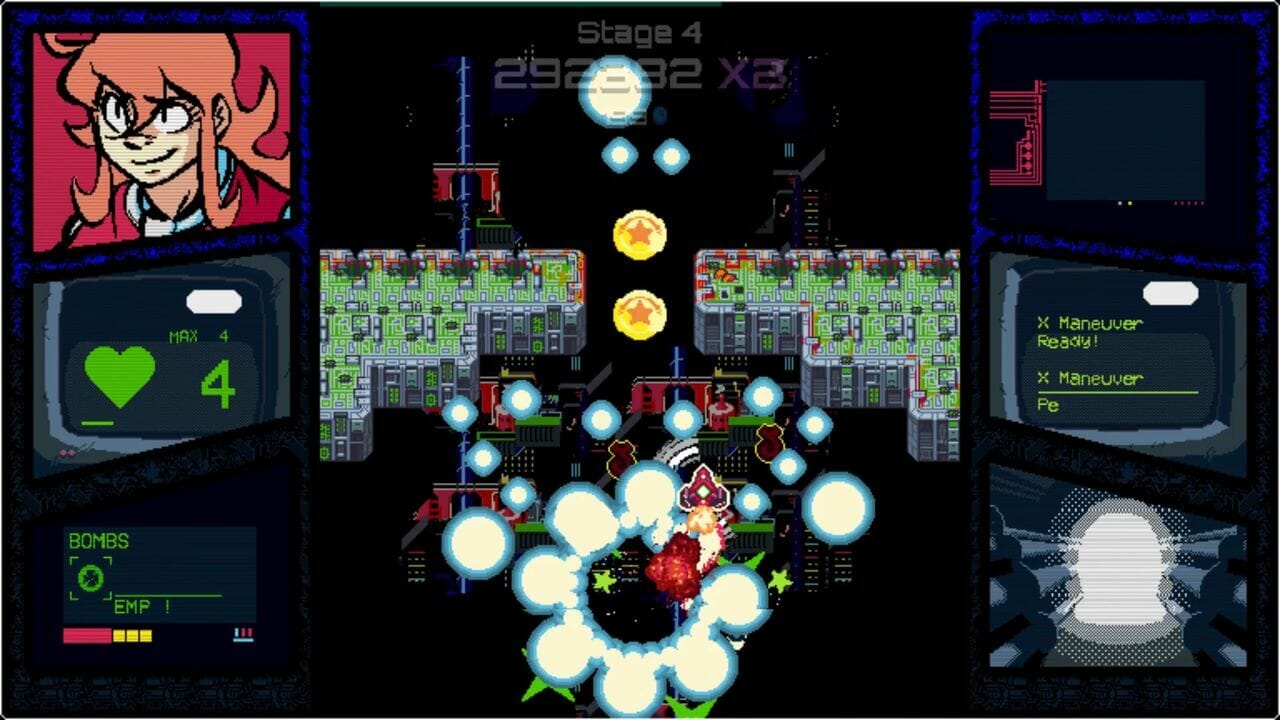 Take note that the main menu of Project Starship X is very basic. There is an option to play together in a local co-op mode with up to two players. For the rest, there is not really much to add or anything special about it. As mentioned earlier, the options are very bare. However, Panda Indie Studio focused more on creating a hard and pure shoot-’em-up experience aimed at testing your skills.

It does not look like they are in the business of creating amazing menus! There is a separate menu for options on a purely technical level. Graphically I can only speak of a “red filter” that dyes the screen in that color and another filter that transforms your HD screens into CRT TVs.

There is therefore no mention of the possibility of removing the psychedelic alternation of colors. From this point of view, the other options add little to the experience. The audio menu boasts the usual choices for music and sound effects. For the rest, there is only the possibility to change the language and to bring the save data back to the starting point. 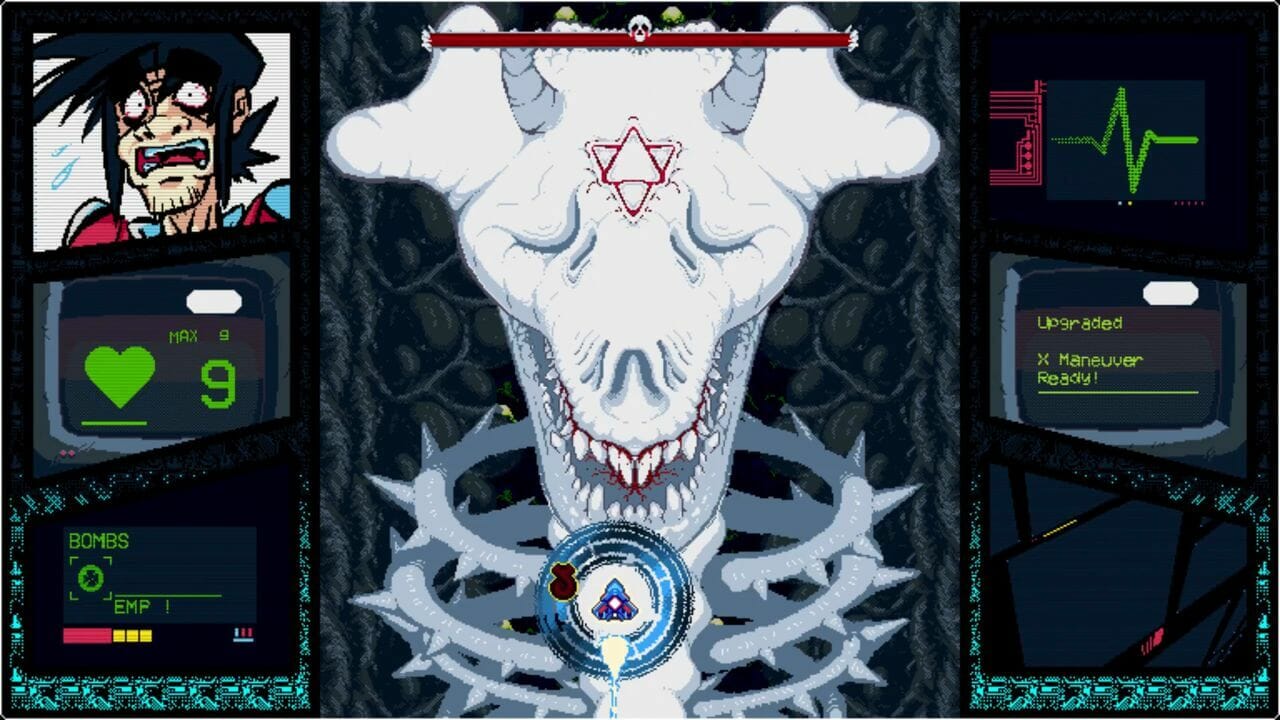 THE GOOD AND THE UGLY

Project Starship X definitely has some good and bad examples of pixel art. All the bizarre ideas that pop up on screen results in a game that certainly doesn’t lack character. You will notice ideas from the WarioWare-style character design to the mere existence of a zombie Hitler piloting a mechanical version of Zero from Kirby’s Dream Land 3.

However, the continuous play of light, which even a Square Enix title would call exaggerated, just does not work. Sometimes it worsens the experience. Musically speaking, there is really nothing to complain about. The sound effects are also excellent, between the NES and a deliberately contrasting auditory cleanliness. Everything sounds perfect!

The longevity of the title, being a game that has its roots in the arcade, is based a lot on how much the player cares about the highest score. For the rest, there is not a sense of completeness sufficient to justify the admission price for newbies. The game is certainly not lacking in personality, but there is nothing special about the characters and their story. It’s about the journey, not the destination. However, if you are great with shoot-’em-up games, this title may be worth it! 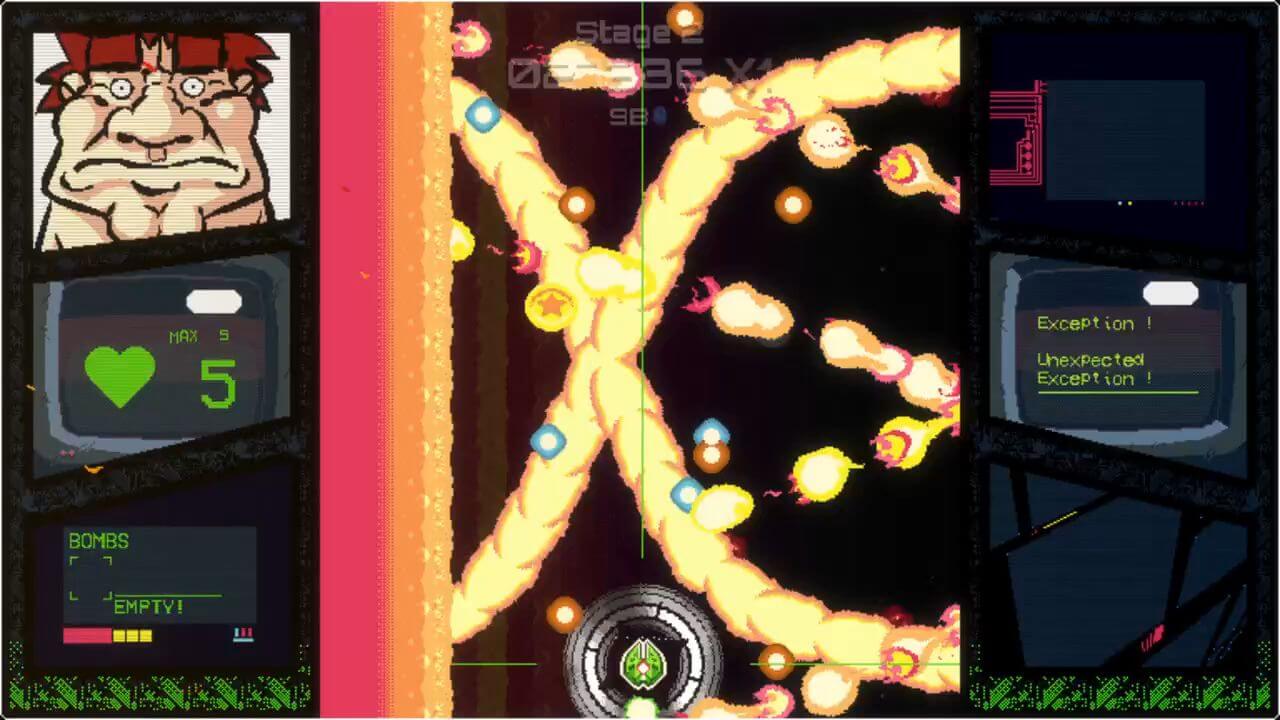 Do you want to try Panda Indie Studio and eastasiasoft’s Project Starship X? What do you think of my Project Starship X review on Nintendo Switch? Please leave your thoughts in the comments below. Are you interested in more games? Check out our reviews for The Pedestrian, Hitman 3, Morbid: The Seven Acolytes, and When The Past Was Around.

In general, the gameplay of Project Starship X accelerates a lot on style, while braking sharply on accessibility. The game definitely offers a well-proportioned challenge. For the experts, I would recommend this with an open heart. However, there are better shoot-em-ups available!